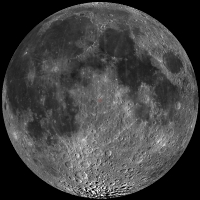 These three craters, located at 9.665°S, 7.646°E, appear to have formed more or less at the same time, certainly within a few minutes of each other. The southwest crater is 180 m diameter; the center crater is 150 m; and the northeast crater is 125 m across.

The projectiles were traveling from the east-northeast (the right side of the frame) and probably struck the surface at a relatively low angle, as indicated by the asymmetric ejecta patterns and the orientation of the ejecta rays. Bright ejecta extends as much as 1 km from the crater center.

The morphology of the craters suggests that the southwest crater formed first, followed by the other two. The southwest crater may only have formed a few seconds or a few minutes before the other two; the timing is indicated by the ejecta from the middle crater that partly covers the southwest crater. The morphology of the two northeast craters (the low northwest-trending ridge between the craters) suggests that the projectiles hit the surface at the same time such that the excavation process of the two craters interacted, forming the ridge.

This same crater morphology was created in laboratory experiments where multiple projectiles were simultaneously fired from a high velocity gun. One of the distinctive features of the simultaneous impact is the presence of a ridge (or septum) of material between the craters.