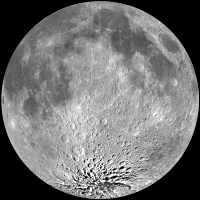 Today's image is of a 100 meter diameter crater (29.814°S, 11.465°E) located in highland terrain between Tycho crater and Nectaris basin. However, it doesn't look like a normal bowl-shaped crater by any stretch of the imagination! The top half looks like it has been shifted to the right relative to the bottom half, which is consistent with motion along a right-lateral strike-slip fault. Likely this odd crater was cut by a fault associated with the nearby Poisson lobate scarp. The faulting helps us determine the relative age of local features. The crater on the right does not appear offset, so that tells us that the fault was active after the crater on the left formed (thus offsetting it) but was not active since the formation of the crater on the right! This relationship also indicates that the crater on the left is older than the crater on the right. Observations like these allow scientists to assign relative ages to features on the surface; the only way to accurately determine absolute ages for features this small is to bring back samples for radiometric age dating. If you were to look at this crater using WAC data (see below), you couldn't tell that it was offset by a fault but you could spot it due to its high reflectivity. High resolution NAC images like these have shown that there is relatively recent, small-scale tectonic activity and that the Moon is far from being geologically dead!

Check out the full LROC NAC image to spot other faulting, HERE.