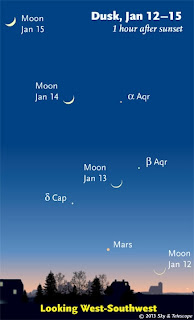 The crescent Moon is always an ethereal sight, but on January 12th and 13th you’ll have the chance to see it with another well-known object when it passes within a fist’s breadth of Mars.

Catching the pair might be a little tricky because they appear together shortly after sunset, not far above the horizon. If you look too early, the Sun will swamp the view. At the moment Mars is also pretty dim (for a planet) at magnitude 1.2. If Mars were high on the stellar dome, spotting it at that magnitude would be easy-peasy — but when low in the sky and hiding in the Sun’s afterglow, it’s much harder.

Fun fact: Right now Venus is 100 times brighter than Mars. If you followed the Moon as it floated past Venus before sunrise on January 10th, you’ll definitely notice the difference between that conjunction and this one. (Not to mention Venus was about one quarter the distance from the Moon that Mars will be.)

The most important thing you’ll need for watching this Mars-Moon encounter is a clear view of the western horizon, either from an open field or a hill.