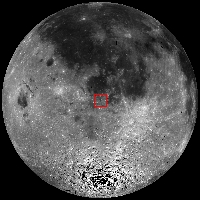 Wrinkle ridges are one of the most common tectonic features on the Moon, and they are found in the lunar maria. Today's Featured Image focuses on one wrinkle ridge, designated Vitello R from the nearby crater, deforming a small mare crater located just south of Mare Humorum. We can tell the wrinkle ridge, and associated tectonic deformation, is much younger than the mare pond as it cross-cuts and modifies the crater (the crater formed after the mare was deposited). Crater counting indicates Mare Humorum is ~3.5 billion years old, but can we say anything more definite about the timing of this wrinkle ridge's formation? Looking at the entirety of the wrinkle ridge may give us more clues.

Explore more of the wrinkle ridge in the full LROC NAC HERE!