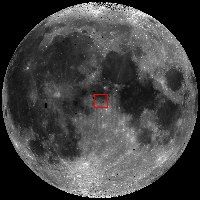 Most craters posted to the LROC Featured Image page are impact craters, however, Hyginus Crater (located at 7.75°N, 6.27°E, in Sinus Medii) is a volcanic crater known as a caldera. Two main pieces of evidence suggest that Hyginus Crater formed through volcanic processes. First, Hyginus lacks a raised rim typical of impact craters. Second, the rim of Hyginus is irregular (not circular), which is typical for volcanic craters caused by collapse. Also, if you look closely with the LROC NAC, the interior of Hyginus has a number of small irregular depressions which are most likely collapse features, indicating a volcanic origin for Hyginus. These irregular depressions are in the Featured Image, distinguished by rough, high reflectance material around their edges.

The entire Hyginus region, shown in the LROC context image below, is a complex piece of lunar real estate. Not only do you have the volcanic crater Hyginus, but also Rima Hyginus, a linear rille, more volcanic collapse craters aligned with the linear rille, and a pyroclastic deposit around the crater Hyginus. How do all the geologic features relate to one another? The Hyginus region is so amazing that it was a candidate landing site for the canceled Apollo 19 mission. Had events turned out differently, we might know much more about the pyroclastic materials and the Hyginus caldera. Continue reading below for a summary of the scientific theory of how the Hyginus region formed.
In a recent paper, scientists proposed a model of formation for Hyginus crater and Rima Hyginus. First, a body of magma from the mantle rose vertically through the lunar crust. The magma stopped rising near the surface and spread out laterally. This introduction of new material beneath the surface caused stress on the crust, which resulted in faulting. Eventually, gasses from the magmatic material still underneath the surface built up and increased the gas pressure, further increasing the stress on the crust.

This stress eventually caused graben to open along the faults, and the same release of stress initiated an eruption, including pyroclastic materials. After the eruption of magmatic material an empty cavity beneath the surface was left behind. This cavity collapsed, creating Hyginus crater. The collapse craters along the linear rille also formed in a similar way.
Explore more of the Hyginus caldera in the full LROC NAC, HERE.

Related Posts:
LPOD: Another Ina?
Ina of the Meniscus Hollows
Whale of a hollow
It's a gas, man
Brayley G
Sinuous Chain of Depressions
It's the Moon's Fault

You can read more about the Hyginus region in the Icarus paper, "An igneous origin for Rima Hyginus and Hyginus crater on the Moon."