The opening image features a linear fracture with aligned pits within the impact melt deposit on the floor, and a crater which may have formed by collapse of impact melt (collapse pit rather than an impact crater). The fracture may have formed as a tube collapsed. Lava tubes commonly form within basaltic volcanoes on Earth, as part of an underground plumbing system that moves magma away from a vent. The same type of tubes and pits probably formed in lunar mare (also basalt). Should we expect lava tubes in impact melt deposits? There is much evidence for such in the NAC images collected over the past few years.

The NAC revealed collapse pits, often aligned in rows, in many impact melt deposits. These pits are similar to collapse pits found in lava tubes on the Earth (often called skylights). In one case two collapse pits side-by-side resulted in a natural bridge! But how did they form? What caused the melt to flow after it ponded in the crater floor? Perhaps slumps of wall material into the melt caused large-scale displacements of still molten subsurface melt to flow. Or perhaps over months and years the crater floor rebounded while melt was still cooling beneath a crust. Both likely happened, so it is not a big surprise that melt moved in subsurface tubes for quite a while after the impact event. 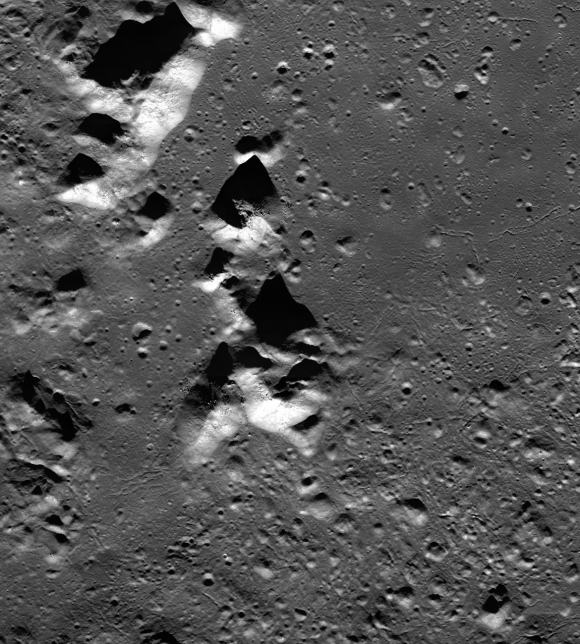 The interior of Copernicus contains dramatic impact melt features. The image below (a subsampled portion of the full mosaic) shows a section of the northern wall of Copernicus. The top of the image shows the edge of an impact melt pool emplaced on a small terrace. At some point, a portion of melt escaped the terrace and the liquid rock carved curved, sinuous channels as it flowed down the wall. Towards the bottom of the image you can see where one of the flows stopped, spread out, and deposited some of the impact melt.

The subsampled mosaic shows a dramatic view of the impact melt in Copernicus crater's floor. The melt in the eastern portion of the image shows several mounds, while the melt on the western half of the mosaic is noticeably smoother. Several terraces at different elevations along the northern wall also have melt ponds. How does Copernicus crater's impact melt compare to other large craters? Tycho crater has a similarly large sheet with a mix of chaotic and smooth melt. As does King crater, Necho crater, Giordano Bruno crater, and almost every other Copernican aged crater larger than 1 km in diameter!

Explore the entire Copernicus mosaic! And compare with the Copernicus peak oblique from yesterday's Featured Image. The mosaic images were taken only 8-10 orbits after the oblique image of Copernicus to maintain similar viewing geometry, making visual comparisons even easier!