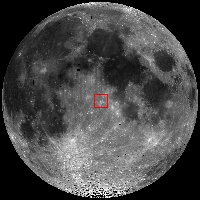 During the Apollo 16 mission Ken Mattingly passed over the site several times at an altitude of 120 km (75 miles).  If you imagine yourself in the Command Module, then this view is close to what you would have seen.

The lighting is nearly identical to that of when the Lunar Module Orion set down on the Moon.


With the annotated version you can easily retrace the routes followed by Young and Duke as they spent three days exploring this highland landing site. Read a detailed reconstruction of the astronaut activities through the Apollo Lunar Surface Journal.

What did they find at House Rock? Why was Shadow Rock an important science target? Is Baby Ray crater older or younger than South Ray crater? Then imagine yourself picking up where the Apollo astronauts left off over forty years ago!

Dive into the full resolution oblique shot of the Apollo 16 site, HERE.

Retrace the astronaut traverses in an annotated version of oblique image, HERE.