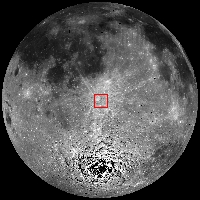 Impact melt is one of most spectacular products of impact cratering events. A comet or asteroid impacts the Moon at 10-60 km/sec, and releases so much energy that it melts a significant amount of the target rock. The larger the projectile, the bigger the crater, and the more melt that is produced. While much of the Tycho impact melt pooled on crater floor, some of it was thrown out of the crater onto the rim. A large mass of impact melt landed on the southeastern rim and flowed down the rim filling low areas and then spilling over and continuing downhill. Between pools, the melt formed narrow flows whose width was controlled by the topography.

The context image (sub-sampled NAC mosaic) below shows a wider view of the impact melt deposit extending down slope from a high pool (on the left side of the image) at an elevation of about -310 m to a lower pool on the (on the right side of the image) that lies more than 600 m downslope (elevation -950 m). The flow is about 5000 m long; its width ranges from 300 to 700 m and is controlled by the topography of the surrounding hills. The texture of the flow surface and the formation of channels on its eastern end (above and below the crater) is a function of the slope of the underlying surface, and the changes in viscosity of the melt as it cools.

The last pool (-950 m elevation) to be filled by this melt flow has well preserved sharp morphologic features that tell scientists much about the history of emplacement. The overall pool is about 4500 meters long by 2100 meters wide.

The impact melt flowed (A) eastward down a narrow valley from a higher pool to the west, then draining into and filling a depression at a lower elevation. To the east of the crater, the flow is about 250 m wide and exhibits a well-defined channel with levees about 60 m wide. Farther east the flow broadens into a large pool. Later a 400 m impact crater formed in hardened impact melt ejecting boulders up to 20 meters in diameter. This crater provides a great section through the flow for future geologists roaming about this geologic wonderland!

The upper right portion of image (B) shows a wrinkled flow surface with ridges spaced about 30-40 m apart; the lower left portion of the flow has a smooth surface. The two different surfaces suggest that there were different pulses of impact melt entering the pool. An initial pulse formed a relatively smooth surface, then a second pulse of melt entered the pool wrinkling part of the crust. As a crust formed on the cooling melt, continued movement compressed and deformed the surface into the wrinkled texture. Along the ridge crests, the crust has been broken up into slabs.
The margin of one impact melt pools reveals a fascinating story (right hand side of image [C]). A series of northeast-trending disturbed zones, 25-50 m wide, cut the flow. The zones are likely are shear planes along which differential movement of the flow has occurred. These planes form boundaries between portions of the flow that moved laterally (to the lower left) by different amounts; the shearing movement has broken up the surface crust of the flow into a numerous small blocks. The edge of the flow is marked by a rubble zone.

The southern end (D) is defined by a series of small lobes which probably represent breakout of still molten impact melt from the edge of the pool. The edges of the lobes are marked by plates of broken crust which presumably were rafted away from the original edge. The large lobe would have broken out from the end of the pool and flowed and broadened into a lobe about 200 m long and 300 m wide.