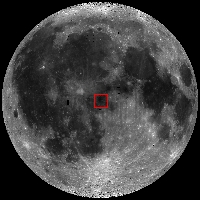 Some regions of the Moon exhibit dark mantling deposits that were formed by fire-fountain style eruptions, similar to Strombolian or some Hawaiian eruptions. Unlike the effusively emplaced mare basalts, pyroclastic eruptions were more energetic because the erupted material contained more volatiles and formed volcanic glass beads. In some cases, pyroclastics are found in small, localized areas, surrounding a vent such as in Alphonsus crater or in Schrödinger basin.

Today's Featured Image is located within a larger regional pyroclastic deposit (5.470°N, 352.014°E; low-reflectance material) south of Sinus Aestuum, and is centered on a small impact crater (~170 m diameter) that excavated fresh pyroclastic material from depth. Since this crater is located within a regional pyroclastic deposit, the freshly-exposed pyroclastics appear lower reflectance than the surrounding surface, possibly as a result of ejecta emplacement from impacts (both near and far afield) that deposited higher-reflectance material and mixed the regolith (impact gardening).

Understanding the distribution, extent, and thickness of pyroclastic deposits can help constrain the volcanic history of the Moon and answer questions regarding the volatile content of the early Moon. For example, Apollo 17 samples of pyroclastic glass from the Taurus-Littrow Valley confirmed that fire-fountain eruptions occurred on the Moon and that the glass beads were rich in titanium as well as small amounts of zinc and sulfur (volatiles). More recently, scientists have improved upon the measured values for volatiles, such as carbon dioxide, water, fluoride, sulfur, and chlorine, in the pyroclastic glasses returned from the Apollo missions. Isn't it amazing how much we can learn from the Apollo samples?

Explore the pyroclastics in the full LROC NAC frame, HERE!

Related Posts:
Aristarchus Spectacular!
A Dark Cascade at Sulpicius Gallus
Up from the depths
Posted by Joel Raupe at 6:46 PM