China and the Moon

With the weekend launch of the latest Shenzhou spacecraft and its successful rendezvous and docking with an orbiting space station, world attention is once again focused on China’s flourishing space program.  Although China’s human spaceflight efforts currently focus on low Earth orbit, in recent years they have sent two robotic orbital spacecraft to the Moon and have announced their intentions for a lunar lander/rover mission.  These efforts lead many in the west to speculate that a presence on the Moon is a likely and realistic goal for China’s space future.  In terms of the possible purpose for such lunar efforts, things are little more vague.  Most assume that China will go to the Moon for reasons similar to the geopolitical motives that impelled America to undertake the Apollo missions.  While some actually welcome China’s aspirations to conquer the Moon, other space observers smirk at their apparent willingness to (as they characterize it) “waste billions of dollars to repeat what America did thirty years ago.”  Others understand why China aims for the Moon.

The United States currently has no strategic space goal.  Many in the U.S. space community argue that the development of commercial launch services through federal subsidies is a goal.  To smooth the path for this approach, calls for consensus have been made by some New Space advocates.  Funding to support the research and development costs of these new commercial services would come by excising chunks of the rapidly dwindling NASA budget.   “Flat or declining” now describes the American civil space program budget and regularly reaching LEO to supply ISS has become our “new” vision.

In contrast, China is conducting an incremental, step-wise effort to gradually but inexorably extend their reach and influence in space, first into low Earth orbit and then into cislunar space and beyond.  Their approach uses a variety of hardware derived from existing systems while adding new capabilities over time.  China appears to be focused and following clear, long-range goals in space.  Because we do not look ahead on timescales of 20-30 years (accustomed instead to a 5-10 year timeframe), we have no long-range strategy to guide what we build or a plan for securing any long-term space goals.

Certainly wide-ranging concerns propel China’s push for human space access, some that can be envisioned now and some that cannot.  But fundamentally, they have accepted the proposition that freedom of space in the 21st century is equivalent to the principle of freedom of the seas that governed 19th and 20th century geopolitics.   In short, such a principle comprises the ability to project power and to protect national interests whenever and wherever China might be confronted within the strategic theater in question, in this case, the domain of cislunar space.

I have written before on the economic, strategic and scientific value of cislunar space, the zone in which virtually all of our space assets and satellites reside.  China intends to preserve her freedom of action by creating a spaceflight capability that can access and use any location of cislunar space, up to and including the lunar surface.  To build a sustainable space program using incremental, cumulative steps, it makes no sense to “leapfrog” over (or to ignore) the intermediate locations from which space faring capability and utility can be demonstrated, established and used.

Much of the published speculation on China’s interest in the Moon focuses on mining the Moon for the nuclear fusion fuel 3He or substances found on the lunar surface, such as titanium or rare earth elements.  In fact, one of the simplest substances found on the Moon has enormous value in space – water.  Water can be used to support human life, as a medium of energy storage, and as rocket propellant.  Water is the currency of spaceflight and one of the most valuable, usable substances we could obtain from any extraterrestrial object.

If I wanted to establish a secure foothold for my country in cislunar space, I would secure the territory near the poles of the Moon.  We know from the results of several recent probes that the lunar poles contain billions of tons of water, much of it chemically unbound as ice, a particularly easy form to harvest, concentrate and use. Material and energy resources, concentrated together in a compact location are assets of immense economic and strategic value.  Wars have been waged over less.

International treaty prohibits claims of extraterrestrial territory by national entities.  But treaties are “gentlemen’s agreements” and sometimes nations do not behave like gentlemen.  There is no mechanism to enforce the 1967 Outer Space Treaty except for a given country’s unwillingness to undergo international opprobrium.  Moreover, a country can withdraw from the treaty at will.  China tends to do what it wants to do, unless the economic or political price is perceived to be too high.  The potential of the Moon and cislunar space may outweigh their sense of geopolitical risk or concern about international ostracism. 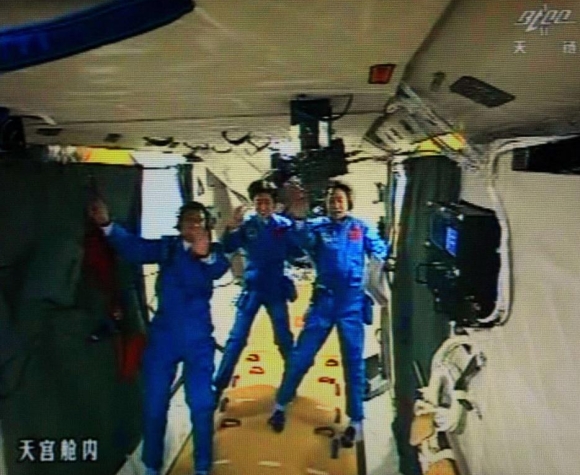 What does this mean for the United States?  To listen to many in the space press, nothing.  A quick yawn and then back to propagandizing for more federal dollars to be passed on to new space companies.  But ultimately, it could mean that their libertarian dreams of a profit-making space frontier will never come to pass.  If free market capitalism and democratic political institutions are to have a future in the new frontier of space, entities, investors and consumers who share these values must secure a notable presence.  If the United States has a vigorous civil space program that creates a permanent presence there, such a system may have a chance to take root.  Conversely, our absence is almost a guarantee that our system and values will not be the guiding paradigm on the new frontier.

For many observers, an absent America (or with a mere supporting role) would be acceptable.  They believe America is what’s wrong with the world and that it’s high time that we step aside (in their opinion to one of subservience and irrelevance – certainly not one of power projection or as an economic engine and technology driver).  Parties (and countries) that lead make the rules.  While China has a great industrial base and a large, seemingly market-based economic system, it is actually a system of big government corporatism, where central planners decide which industries shall be allowed to grow and in what direction – capitalism, under total governmental control.

China is a rapidly advancing technically and is one of our largest trading partners, attributes beneficial in relationships between equals.  Historically, once a shift occurs in the status of partners, relationships change.  Because China’s influence in the world is growing, it is vital that we discuss and weigh these facts.  Our national economic and security interests cannot be jeopardized by a misguided rush to hand our space future over to companies who are in the imagining stage of what China just accomplished this weekend.

Originally published at his Smithsonian Air & Space blog The Once and Future Moon, Dr. Spudis is a senior staff scientist at the Lunar and Planetary Institute. The opinions expressed are those of the author and are better informed than average.
Posted by Joel Raupe at 3:51 PM