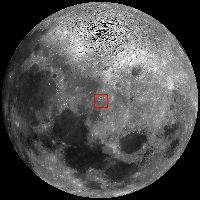 Simple craters on the Moon, roughly ≤15 - 20 km in diameter, are typically bowl-shaped, but changes in impact conditions influence the final crater shape. When a bolide (asteroid or comet or even spacecraft) impacts the lunar surface, the resulting crater shape is dependent on several factors, and the influence of these factors on crater shape is complicated. Final crater shape is dependent on factors such as angle of impact, speed of impact, slope of the surface, and target material, and often it is difficult (at times, impossible!) to determine which factor dominates the crater formation process. In fact, the bulk of knowledge about impact cratering mechanics is derived from experiments and numerical modeling that attempt to understand the dynamics of impact cratering.

Today's Featured Image is proof that impact crater shape is somehow linked to the factors mentioned above. Hercules E crater (45.783°N, 38.698°E, ~9 km diameter) formed on the southern rim and wall of the much larger Hercules crater (~70 km diameter), nestled between Lacus Mortis and Atlas crater. The shape of "E" (see LROC WAC context image below) is elongated and more elliptical than circular, especially compared to Hercules G and an unnamed crater that impacted into the Hercules rim to the east. In the WAC, just over half of Hercules E is in shadow, so observations of the floor are impossible at this scale. However, the crater interior is visible in the opening NAC image, and the triangular-shaped floor suggests that Hercules E is not a simple bowl-shaped crater after all.

An initial interpretation might be that the morphology of the crater interior was largely influenced by formation on the rim and wall of Hercules, but there are two circular craters that also formed on the rim and wall Hercules. The presence of these circular perched craters on the wall of Hercules, as well as circular perched craters elsewhere on the Moon, suggests that other factors (impact velocity, impact angle) likely contributed to the elliptical shape of Hercules E. When the angle of impact is low (<15°), crater shapes change from circular to more elliptical or oblique, so it may be that Hercules E resulted from an oblique impact. However, impact velocity can also affect crater shape and low velocity impacts may produce irregularly-shaped craters.


Suffice to say, the answer to the question of "What factors primarily control crater shape?" is complicated and is probably dependent on the location of the crater, the size of the crater, and the geology of its surroundings. Perhaps a global survey of crater shapes using LROC WAC and NAC DTMs, paired with hydrocode numerical modeling of crater formation, would be beneficial to assessing this science question.

What do you think? What observations can you make when exploring the full LROC NAC image, HERE?