LROC: On the Edge 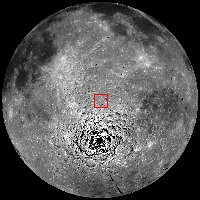 In large diameter (greater than 10-20 km) craters, modification can include faulting that creates terraces as the crater walls are too large and steep to hold together. Gravity wins and the unstable wall collapses.

However, walls of small craters (like Manzinus M) are stronger and do not usually collapse, thus the crater retains its initial bowl shape. The lineations on the rim are likely faults that developed some time after the crater formed. You can see that these fractures are more recent than the impact as they cross-cut smaller craters along the rim of the crater. These fractures probably opened as the smaller impacts formed on Manzinus M, steadily weakening the walls.

Manzinus M also contains spectacular impact melt deposits on its floor. As part of the tremendous energy released during the impact process, lunar crust is heated to temperatures well in excess of 1000°C (1832°F) and thus melted! There was so much melt that it ponded, cooled, froze, and eventually cracked. Look for the sharp boundary between the melt deposit and the wall of the crater in the full NAC image (link below). This boundary is all at the same elevation, like a ring in a bathtub (evidence that the melt was very fluid and ponded).

What other post impact processes are there in the full NAC frame, HERE?