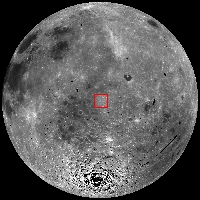 Craters on the Moon come in all shapes and sizes. Many factors, including impact velocity, target material, projectile material, and angle of impact, influence the final crater morphology and the generation of impact melt, which is why no two craters are exactly the same. Milne N crater (35.828°S, 111.275°E, ~40 km diameter) exhibits substantial crater wall slumping and an irregular crater rim in addition to impact melt ponds on the crater floor. The slumped portions of crater wall modified the crater interior while the impact melt was still at least partially molten. As a result, the crater floor is not as flat as other craters with impact melt deposits, and a contact between impact melt and slumped wall material is observed in the opening image.


Looking at the opening image, the contact between slumped crater wall and melt is emphasized by the presence of perched boulders on the wall, some of which have rolled down the slope to the edge of the melt pond. Note the presence of superposed impact craters, fresh and degraded, on the impact melt. The numerous small superposed craters indicate that although Milne N is youthful in age to many surrounding craters, compared to other craters with impact melt (such as such as Jackson crater, Rümker E crater, Thales crater), it is relatively older. The soft-looking surface of the melt in Milne N suggests that enough geologic time has passed for the melt to develop a thin regolith layer, thus eroding the crisp-looking surface of melt to a smoother texture.

Can you trace the melt pond boundaries in the full LROC NAC image, HERE?

Related Posts:
Impact Melt Boundary
Fractures in Ohm's Melt
On the Floor of Thales
Posted by Joel Raupe at 7:06 PM