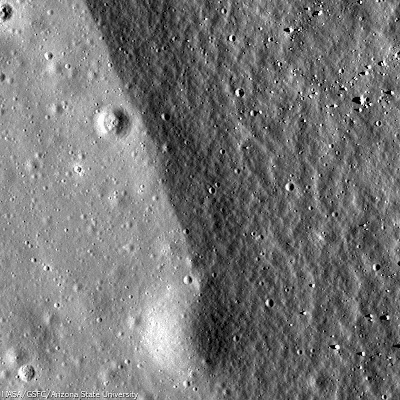 Today's Featured Image displays a portion of eastern rim of Flamsteed P crater, located in southern Oceanus Procellarum. The rough and darker right side corresponds to the rim slope, and the brighter and smoother area to the left is the younger mare basalt. Flamsteed P's interior was mostly filled by mare basalts and all that remains are portions of its rim showing as discontinuous ridges (see WAC context image below).

In terms of local timeline of events (geochronology), following the formation of Flamsteed P, mare basalt flooded its interior and exterior. Later a small crater (110 m diameter) formed just at the boundary between the mare and crater rim (bottom of today's Featured Image). This small crater is half covered by the older rim unit. Does this make sense? Even though the small crater is much younger than the Flamsteed P rim it is buried by rim materials that slid downhill after the crater formed. What cause the regolith to move? Perhaps moonquakes generated by internal stresses or nearby impact events. Or perhaps a slower process of downhil creep caused by thermal cycling of the regolith (soil). We have much to learn about the Moon - the next frontier! 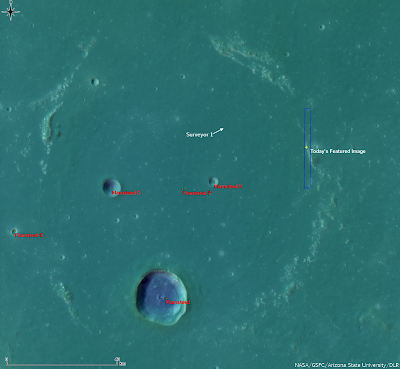 Whole of Flamsteed P, yellow cross and blue rectangle indicate the locations of the April 6, 2011 LROC Featured Image and the NAC frame from which is was taken. False color image from the Digital Terrain Model (DTM) centered at 3.15°S, 315.96°E. A LROC Wide Angle Camera (WAC) mosaic at 100 meters per pixel resolution is overlaid by LROC WAC DTM at 500 meters per pixel. View the full-size context image HERE [NASA/GSFC/Arizona State University/DLR].
The topographic color was produced as a by-product of stereo analysis of the WAC global dataset. Producing the global Digital Elevation Model (DEM) is a big job being led by LROC team members at the German Aerospace Center (DLR; English version) in Berlin. 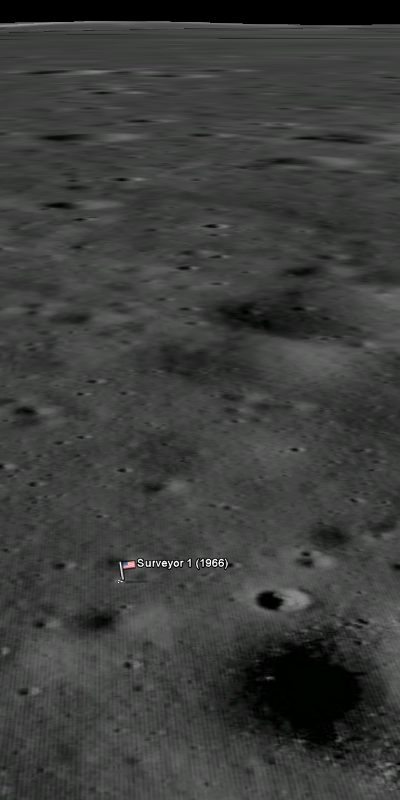 Flamsteed P also hosts the first United States spacecraft to soft-land on another world, on June 2, 1966. The sentinel Surveyor 1, visible in this illusion of a 500 meters high "flyover" of LROC NAC images of the spacecraft's shadow on the ancient mare-inundated crater's interior. The northern rim of Flamsteed P is just apparent on the horizon [Google Earth/NASA/USGS/GSFC/Arizona State University].
Explore the boundary of mare basalts by viewing the full NAC frame! 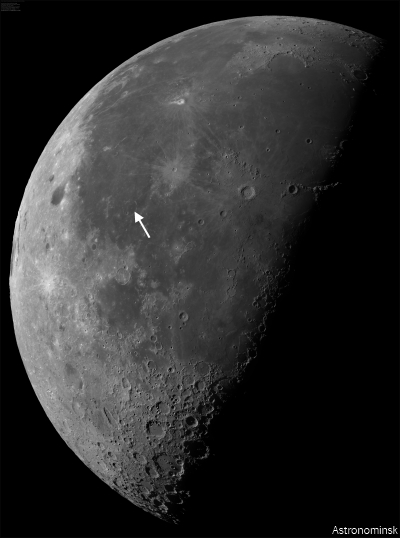 This 15 percent reproduction of a 6100 x 8200 mosaic from 43 individual images from Astronominsk hardly does it justice. You own it to yourself to see the original, captured in August 2010, just to see if you can locate Flamsteed P, a familiar target for even modestly-equipped amateurs [Goryachko, Abgarian & Morozov, Minsk, Belarus]. 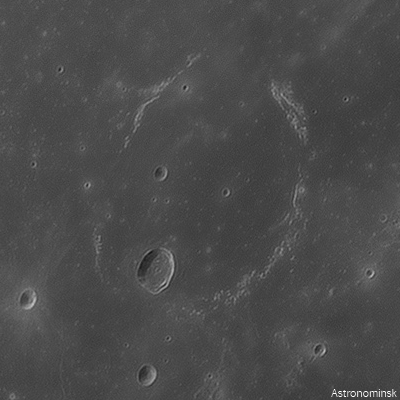 And here's the line-of-sight view of Flamsteed P as seen from Earth, not close-up but at full-resolution from the Astronominsk. The contact zone between the eastern rim of the nearly buried 100 kilometer-wide crater, discussed in the LROC Featured Image, can be spotted with little effort [Goryachko, Abgarian & Morozov, Minsk, Belarus].
Posted by Joel Raupe at 1:21 AM