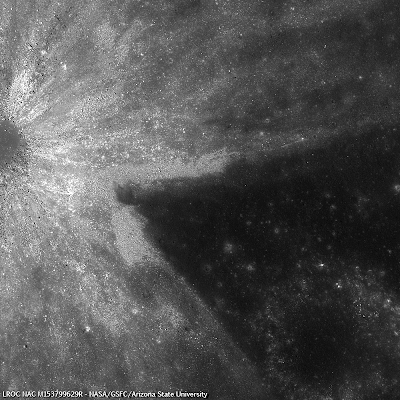 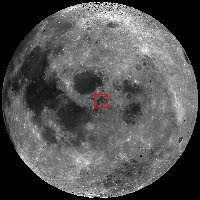 The ejecta pattern of this unnamed crater left a slice of Mare Undarum (Sea of Waves) uncovered, east of the crater Firmicus. When an impact ejecta blanket is not uniform, the ejecta is defined as asymmetric. Craters with asymmetric ejecta are either caused by pre-impact differences in composition, unusual topography, or an oblique angle of impact. Asteroids hit the Moon at fantastically high speeds, greater than 16 km per second (or 35,000 miles per hour), and most of the craters left by these impacts are circular. However, the shape of the crater (or the distribution of the ejecta blanket) changes when the the angle between the asteroid path and the surface becomes small, 15° or less. In such a low angle impact, the ejecta has more momentum in the direction of travel of the impactor, which causes the asymmetric ray patterns. In this case the extent of ejecta extends to the north and south and a lack of ejecta to the east, probably indicating that the impactor probably came from the east. Another example of an oblique impact is Messier, where the shape of the crater is elliptical due to the angle of impact. 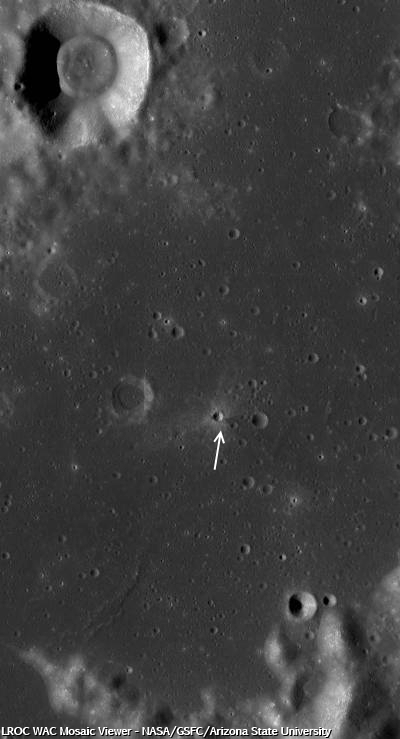 LROC WAC Mosaic Viewer 100 meter-per-pixel context image; white arrow designates the location of the crater in LROC's Featured Image released April 20, 2011 [NASA/GSFC/Arizona State University].
The ejecta rays are high reflectance relative to the surrounding mare terrain, but are these rays caused by maturity or composition? In most cases, a well-defined, high reflectance ray pattern suggests the relative youth of an impact crater. However, these rays may be compositional if the crater excavated material from beneath the mare layers. On the Moon and other bodies, craters which excavate material from depth (with compositional rays) can be used to estimate the thickness of the mare layer.
View the entire NAC image!

Related Images:
Small crater at the southern rim of Menelaus
Asymmetric Ejecta
How did I form?
Posted by Joel Raupe at 2:20 AM