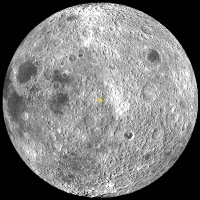 Today's Featured Image highlights differences in how the surface appears as the Sun angle changes. As seen in the opening image, the two images show the exact same area, but their appearances are remarkably different. Both images show the southern portion of the ejecta from an unnamed fresh 1 km crater (0.4933°S, 110.7156°E, 9.8 km west by northwest of Buisson V, an ancient equatorial crater just beyond the east limb.

The darker image, highlighting the granularity and elephant skin texture of the surface, was acquired when the Sun was low on the horizon (incidence angle = 68°), and the image characterized by bright swaths of ejecta was acquired when the Sun was nearly overhead (incidence angle = 8°).  Both were acquired with the cameras looking straight down. The small crater (about 27 meters in diameter) in the upper-middle each segment is a good landmark to confirm both images show the same location.

When the Sun is high no resolvable shadows are cast, and surface brightness (albedo) variations stand out. The low Sun image has sharp shadows, highlighting the surface texture. Due to these drastic changes caused by the Sun angle scientists use NAC images at specific lighting conditions for different studies, of morphology, composition, optical and molecular maturity, topographic mapping, etc).