"Donut Hole" structures on the floor of Harriot B 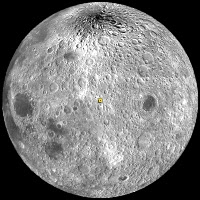 The planets in the Solar System are continuously bombarded by space rocks. This violent process early on formed the planets by accretion, and impacts still shape the surface of terrestrial and icy bodies today.

Since the Moon lacks an atmosphere it preserves the impact history record of the inner Solar System. However, this record is less than complete; volcanic resurfacing and crater saturation of the surface erase part of the record. Ancient volcanic activity, resulted in massive outpourings of lava over parts of the Moon, filling in and covering old craters beneath layers of basalt. Crater saturation is a term used by scientists to describe a point after the planetary body has been completely covered with craters of a certain size such that every new crater of that size overlaps an older one, obliterating the evidence of the older craters' existence.

These mounds are likely weathered central peak formations. Central peaks form by the gravitational collapse of the crater walls which pushes material into the center of the crater and from the rebound of the floor; both of these events occur at the time of crater formation during the modification stage of the crater.

Harriot B crater formed, slightly off center, over the much older and degraded Harriot crater (see the WAC context image below). The older crater's walls have slumped down, resulting in a rounded rim, in contrast to Harriot B’s sharp rim. Since Harriot has a greater diameter than Harriot B, 53 km and 38 km respectively, we can assume the impactor that formed Harriot B had less energy (less mass, less velocity, or both) than the impactor that formed Harriot.

Succeeding impacts will ensure that the visible evidence of Harriot crater will cease to exist.  This becomes a problem when using crater counts to date planetary surfaces.  Once a surface reaches crater saturation, scientists can only estimate a lower bound for how young the surface is.

One day, Harriot B will suffer the same fate as Harriot.  A new impact will erase it, along with its central mounds that deliciously look like donut holes. The Moon’s surface is a dynamic place, because it seems static in human-appreciable timescales this is easily forgotten.  So, let’s enjoy Harriot B’s central formations while they’re still around, check out the full resolution NAC below: