Birt E and the fiery rift valleys of Nubium 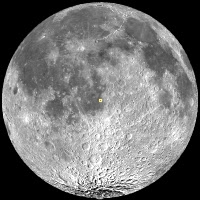 Birt E (20.72°S, 350.337°E) was not created like most craters on the Moon; there was no meteorite impact. Lava sputtered out of this pyroclastic vent in Mare Nubium over 3.4 billion years ago, dispersing lava onto the surface and leaving the crater we see today.

How can we tell it is a volcanic vent and not an impact crater?

Impact craters and volcanic vents can be differentiated because vents often have an irregular or elongated shape (as with Birt E). Impact craters are usually circular in shape, created by the shockwave during an impact event.

Also, the vee-shape of this crater is likely a product of the formation mechanism. Vee-shaped vents are thought to be formed from a pyroclastic eruption. Gasses fractionating out of the liquid rock create violent events during eruptions. Explosive eruptions created the shape that we see today, but Birt E could have had a complex history with effusive eruptions forming Rima Birt, the short sinuous rille flowing from Birt E to the south-southeast.

Over long enough time scales Birt E will be filled in with ejecta from newly formed craters around Mare Nubium or by mass wasting of the walls into the crater. Let’s enjoy this ancient crater today while we still can!

Check out the topography in the full NAC DTM HERE.