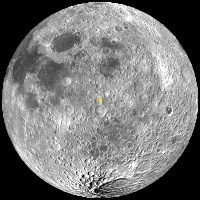 The boulder above (21.085°S, 80.777°E) in the opening image is likely debris ejected during the violent excavation of the 1.6-km diameter crater immediately to the west (left).

The boulder was deposited ballistically; the distance it travelled and its time of flight are related to its ejection angle and velocity.

For the boulder, was this flight a "small step" or a "giant leap?"

Looking at the image above, we can deduce that the boulder was deposited with enough force to make a noticeable impression in the ground. However, a more forceful landing would have highly fragmented the boulder.

The boulder is located about 500 meters east of the crater rim crest, which is only about a third of the crater diameter. Thus, this boulder did not travel very far or very fast.

Explore the entire crater and its ejecta below:

The grooves carved by boulders ejected at relatively low velocities are in many ways similar to the spotty tracks etched by boulders sliding, rolling, and bouncing down steep slopes. Also, boulder tracks (like these) often resemble the astronauts' footprints on the lunar surface, since both have relatively recently disturbed the soil in narrow paths.

In honor of the 45th anniversary of the Apollo 11 lunar landing (July 20, 1969), revisit some of our previous posts about large boulders visited by astronauts:

Finally, revisit some of the best LROC images of the Apollo 11 landing site and see if you can find any large boulders. You should find very few large boulders, as the mission planners sought a low-risk site for the first Moon landing:

High Noon at Tranquility Base
Apollo 11: Second look
A Stark Beauty All Its Own
"Houston, Tranquility base here."
Flip Book - Apollo 11
Posted by Joel Raupe at 9:35 PM