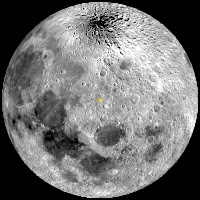 Materials of varying albedo create intricate patterns on the walls of the crater, including the banding patterns featured in the opening image.

This particular portion of the wall includes a block of slumped material, as indicated by the characteristic arcuate faults near the crater's rim crest (see image below). The slumped material is overprinted by finger-like flows of finer particles that moved as slides of dry debris.

When did these mass-wasting events occur? Did they occur during the impact event, shortly after while the landscape was still ringing from the shock of impact, or millennia later? The lack of high albedo (bright) ejecta around the crater and the subdued appearance of the rim crest indicate that this crater did not form particularly recently; perhaps it is between 1 and 2 billion years old.

The crisp edges of the debris flows and arcuate scarps in the walls, however, suggest that they are much younger than the crater. So, while this landslide probably did not form yesterday, it is likely significantly younger than the crater itself, probably less than half its age. However, without more data, it is impossible to know precisely when these events occurred. Repeated imaging over many decades may provide more insight into how crater walls age with time. Alternatively, samples returned from crater walls may provide a method to age-date mass-wasting events.

Try to find at least three other examples of mass-wasting features in the western half of this crater below. Pan and zoom to find examples of landslides, talus deposits, and boulder tracks: