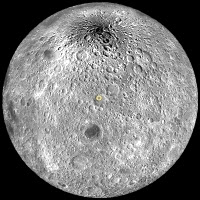 The longer a crater's ejecta is exposed to space weathering, the lower the albedo of the ejecta becomes.

Over time, gravity also takes effect, pulling material downslope and softening the appearance of the crater rim and the hummocky ejecta deposit.

In this case, the slightly asymmetric ejecta blanket is likely due to the fact that this crater formed on top of existing topographic highs, which appear to be the intersecting rims of partially flooded craters.

The crater in the opening image is located in the floor of the much larger, much older crater Campbell (See WAC animation below). Campbell, named after two American astronomers, is an interesting study in its own right.

A portion of the floor of Campbell has been resurfaced by basaltic volcanism, an uncommon occurrence on the lunar farside. In this case, the volcanic activity did not produce sufficient lava to completely cover all of the craters in the floor, leaving traces of flooded craters like the one at lower right, on the edge of the ejecta blanket, in the NAC field of view above.

Flooded craters are useful to scientists trying to determine the timing and sequence of events in areas that display multiple geologic processes in close proximity, such as impacts and volcanic activity.

Because we can see partially flooded craters, we know that the crater Campbell must have existed long enough for new craters to form on its floor before volcanic activity began.

The fresh crater from Today's Featured Image adds another point of reference because its ejecta drapes the nearby mare deposit, making it the most recent addition to this region's geologic history.


As noted in the YouTube video, presented by the Japan's space agency JAXA, Campbell is immediately north of Von Neumann and Wiener craters (on Campbell's southeast and southwest, respectively). Between these two craters, unnoted however, is Wiener F, with it's distinctive semi-circular bench of impact melt, discussed in more detail HERE.