Making a splash at King crater 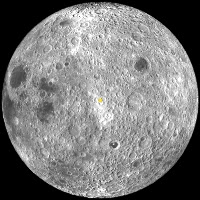 In the image above, impact melt pooled among the terraces in the walls of King crater, a complex Copernican crater on the lunar farside.

Impact melt is generated when kinetic energy associated with an impact is transferred to the target rock. Shock waves cause the rock to melt nearly instantaneously. The impact melt is flung all over the interior of the crater and some even makes it out of the crater.

Melt splashed on the crater walls tends to drain back down pooling on ledges. This downward flow resulted in a coating of impact melt called a veneer, visible in this region, along with other features like fractures.

Impact melt forms many exquisite features on the lunar surface such as flows, lobes, pits, fractures, channels, polygonal patterns, and more. Explore the impact melt features of this region in the full NAC mosaic HERE.