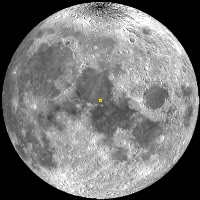 The opening Featured Image is a LROC NAC image, juxtaposed with a slope map, NAC-derived DTM and recent LROC NAC observation of area.

Slope maps are useful to planetary scientists because topographic features like craters and small ridges really stand out. At the  location in the LROC Featured Image field of view, the mare on the west side of the ridge is about 100 meters higher in elevation than the mare on east side of the wrinkle ridge, and the peak elevation is around 50 meters above that (see profile below).

The difference in elevation between the eastern and western flanks of the ridge could be due to the lunar surface buckling and folding beneath the surface, or it could be from mare fill after the wrinkle ridge was formed.  Dorsum Nicol has a width of 10 km at its widest and 5 km at its narrowest. Take a look at the full feature in the context image below.

Wrinkle ridges are are surface expressions of compressional forces being released; they are seen in all large maria on the Moon. The loading from the massive flood basalts during mare volcanism could have caused the lithosphere to flex because the density of the flood basalts is higher than the anothositic highlands material. Buoyancy forces were at work here, causing viscoelastic relaxation and inducing forces in the mare rock.

These forces caused the once convex surface of the maria to become more planar as time went on. This is a problem because a plane has less area than a curved surface when they are bounded by the same radius. Where was the rock going to go? Well, the maria resisted this change in topology until something broke! Wrinkle ridges are the expression of that thrust fault behavior.

Check out the full NAC frame on the the LROC DTM product page, HERE.

Related Posts:
Elongated crater in west Tranquillitatis
Faulted Kipula
Offset floor of Buys-Ballot crater
Wrinkled? Yes, but how old?
Wrinkles in Mare Frigoris
Really wrinkled wrinkle ridge
Wrinkle Ridge vs. Impact Crater
Wrinkle Ridge in Mare Crisium
Boulders in the Sea of Serenity
Up and down, back and forth
Posted by Joel Raupe at 3:51 AM