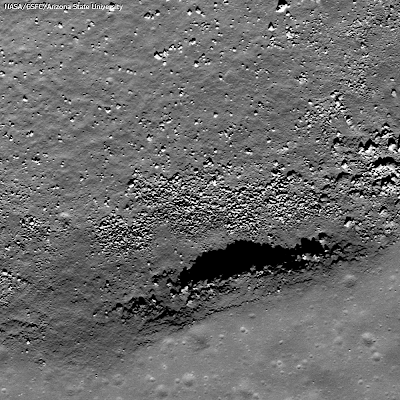 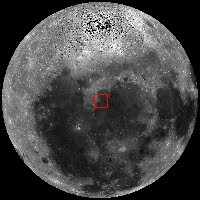 Sinuous rilles are frequent in the mare-filled basins on the Moon and reflect erosion caused by turbulent, very hot lava extruding from a vent. Oftentimes, sinuous rilles meander in tight twists and turns. However, there are exceptions to the "general rule" of sinuous rilles and today's Featured Image of an unnamed rille near Promontorium Heraclides (41.07°N, 326.49°E) may be one such example. Less than 10 km long, the rille is linear with one gentle twist. The opening image highlights a portion of the southern wall of this rille, where rocks outcrop from the rille walls. The rocks jut out from the wall, forming a jagged shadow with illumination from the lower right, and there is abundant debris on the floor that likely represents eroded wall material. It may be that this outcrop is the ceiling of a slight overhang into the rille. If this is the case, obtaining rock samples from beneath the overhang would be useful in order to ascertain exposure ages of rocks in the outcrop compared to those beneath. 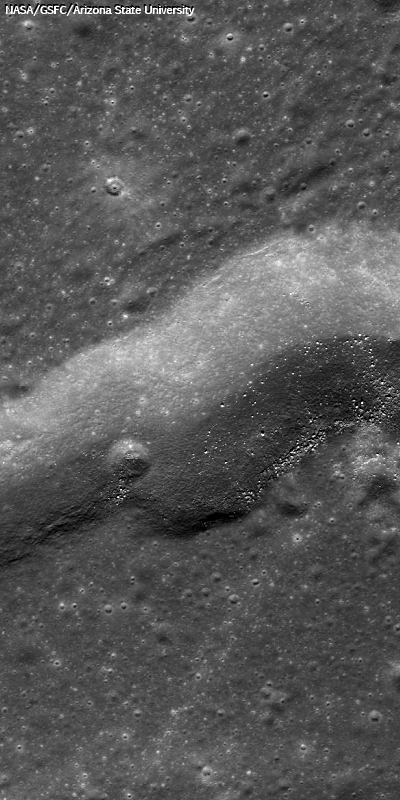 For context, a full-width view of the LROC NAC frame M124790534R shows a center slice of the unnamed rille featuring a possible overhang at a stratigraphic crossroads on the southern edge of Sinus Iridum and Mare Imbrium. In addition, measurements of the ancient solar wind could be made from rock samples as solar wind particles are implanted onto the lunar surface. 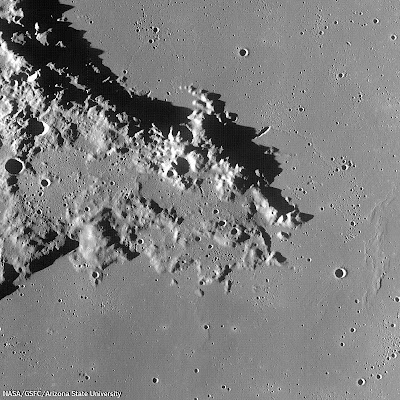 Promontorium Heraclides in long shadow and higher relief of LROC WAC monochrome (689 nm) mosaic gathered over the course of orbits 2480-2483, January 9, 2010. The long shadows of the promontory and the southern curve of the semicircle of mountains surrounding Sinus Iridum, bring an early late afternoon sunset to the unnamed rille. Mare Imbrium stretches east-southeastward. A larger view of the image cane be seen HERE [NASA/GSFC/Arizona State University].

However, let's not be too hasty! The interpretation of an overhang created by the outcrop is based largely on the presence of the distinct shadow on the rille floor. This image has an incidence angle of ~40°, so the Sun is just a little more than halfway to noon in the lunar sky. Illumination often plays tricks on scientific interpretation, so just because there is a prominent shadow cast by the outcrop does not mean that an overhang truly exists. The best way to determine whether the overhang is real or an illusion is to observe the location under different illumination conditions. Unfortunately for us, the current LROC coverage contains images with incidence angles of ~40° to ~45°, so we are stuck wondering whether this outcrop overhangs the rille walls for the time being.

Can you find any evidence for other outcrops or potential overhangs in the full LROC NAC image? 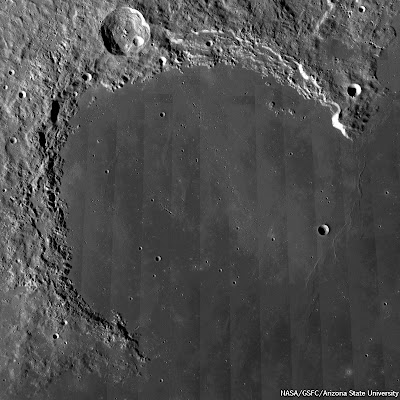 The mountainous 411 kilometer-wide semi-circumference and interior of Sinus Iridum, on the northeast edge of Mare Imbrium. At lower left is Promontorium Heraclides, marking the border with the Imbrium impact zone. The rest of the original Sinus Iridum crater was presumably destroyed and carried under by the weight of the basalt-flooded Imbrium basin over repeated inundations. An early LROC WAC mosaic released late in 2010 [NASA/GSFC/Arizona State University].