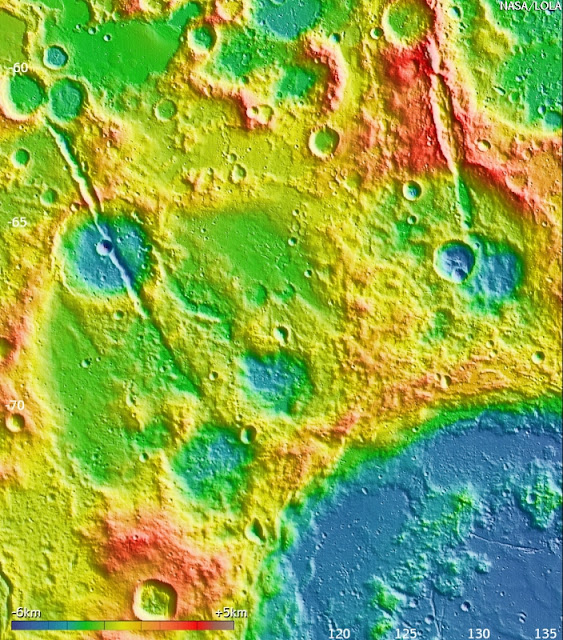 Laser altimetry by LOLA, now having traveled nearly 10,000 orbits of the Moon on-board the Lunar Reconnaissance Orbiter, has confirmed the existence of impact basins once believed "questionable" [NASA/GSFC]. 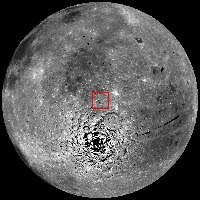 GSFC - This image reveals the power LOLA data have in helping scientists refine sizes of impact basins on the Moon. By studying lunar impact basins, scientists refine their understanding of what happened in the earliest stages of the formation of our Solar System, including the size distribution of early impactors.

The Sikorsky-Rittenhouse impact basin, which is estimated to be between 3.9 and 3.5 billion years old, was originally estimated to be 310 km in diameter, and its existence was considered "questionable" in Wilhelms' lunar atlas. This initial definition was based on low-resolution images from Lunar Orbiter missions. Later Earth-based radar estimates confirmed Sikorsky-Rittenhouse's status as a basin and placed the basin diameter at 319 km. However, the use of LOLA data have helped scientists to further define the diameter size to 275 km, which represents an 11% decrease in the original diameter estimate. LOLA's high density of measurements across the Moon allows its data to create the most accurate definition of lunar craters ever. 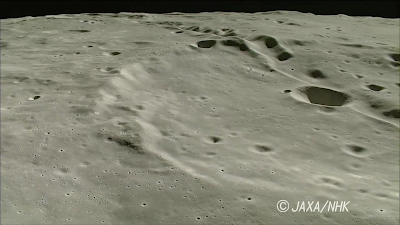 Late in its mission, Japan's Kaguya captured this relatively low altitude HDTV view across 98 km-wide Sikorsky (66.1°S, 103.2°E), bisected by 310 km-long Vallis Schrodinger. The northern rim, where the horns of the Valley cross through, is also the broader and essentially invisible rim of the Sikorsky-Rittenhouse impact basin. View the full-sized Kaguya HDTV image HERE [JAXA/NHK/SELENE].
Posted by Joel Raupe at 2:41 AM