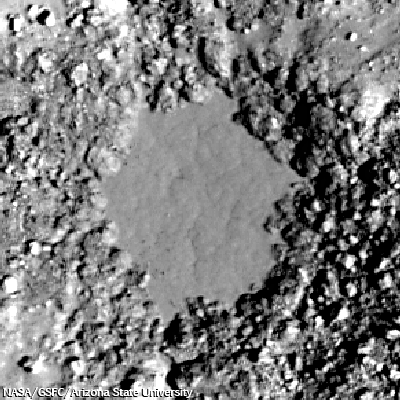 An exaggerated close-up of an apparently unmarked pool of impact melt marking the bulls-eye floor of what must be a very fresh crater at a geologic crossroads in Oceanus Procellarum. Sampling in and around this "dig" would add to our knowledge of the Reiner Gamma albedo swirl and magnetic anomaly, the Marius Hills to the north, nearby Reiner crater and the vast Procellarum basin itself [NASA/GSFC/Arizona State University]. 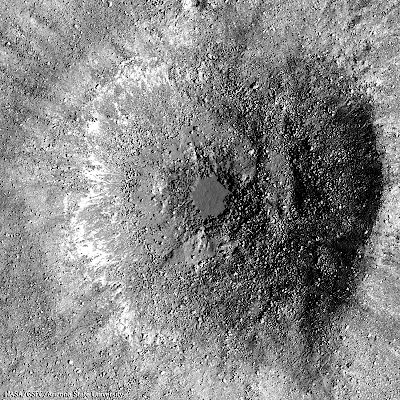 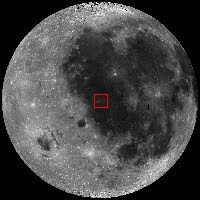 This unnamed crater is near the Reiner Gamma Swirl in Oceanus Procellarum. The crater’s relative youth makes it a great example to investigate how impact craters form. The cratering process occurs in three stages: contact and compression, excavation, and modification. The impact melt and boulders were created during contact and compression as the bolide transferred its kinetic energy to the target. 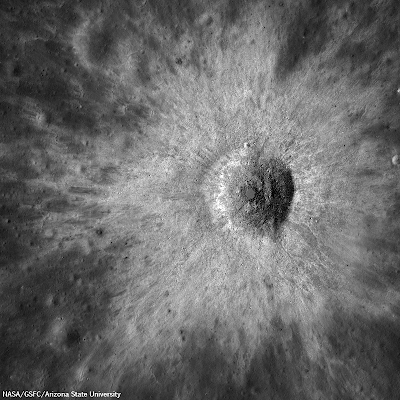 The ejecta blanket of the unnamed crater. Image is a mosaic of NAC pair M111972680, image width is 3.0 km [NASA/GSFC/Arizona State University].

Can you find similar craters in the full NAC frame? 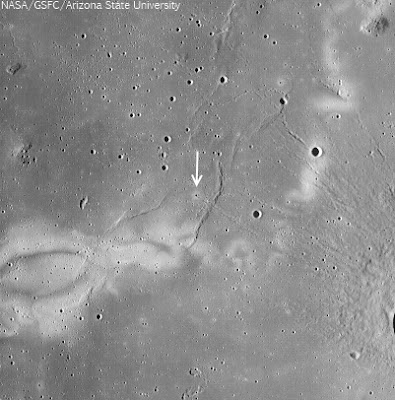 The arrow notes the location of the relatively recent crater enfolded by the wispy anomalous albedo of Reiner Gamma, the Moon's most extensive such "swirl," in this 125 km-wide monochrome (643 nm) LROC WAC mosaic. The small crater is also situated near the end of a secondary crater chain radiant of the Reiner crater impact zone, just peaking into view at lower right. A wider field of view can be viewed HERE [NASA/GSFC/Arizona State University]. It's not inconceivable that the small but bright (optically immature) impact crater northeast of the "eye" of Reiner Gamma could be imaged from Earth. For a variety of reasons it is invisible in this spectacular mosaic captured by the Astonominsk partnership on September 25, 2008. Neither are many other lower profiled features characteristic of the Procellarum basin anatomy [Astronominsk].
Posted by Joel Raupe at 8:50 PM