Did Earth start out with two moons? 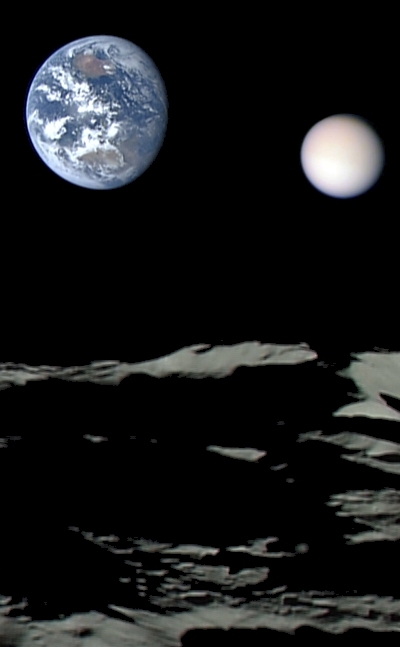 Did Earth, for some protracted period in its earliest history, have "two moons?" Too be precise, for the largely held view of our Moon's origin to be fact, the Moon must once have had many, many of those planetesimals, through fairly rapid accretion, becoming one. A suggestion just published in the science journal Nature posits the origin of our present Moon's farside highlands, and many of its aspects reflecting a lack of uniformity, may have their origins in a primeval collision between two progenitor moons. This possibility may also explain the relative size of our Moon and Earth, among the rocky terrestrial planets. And while were setting our imaginations on a new, unrestrained course, who knows? One of those two moons might have had. at least for a time, a substantial atmosphere [NASA/JAXA].

Forming the lunar farside highlands by accretion of a companion moon

The most striking geological feature of the Moon is the terrain and elevation dichotomy1 between the hemispheres: the nearside is low and flat, dominated by volcanic maria, whereas the farside is mountainous and deeply cratered. Associated with this geological dichotomy is a compositional and thermal variation2, 3, with the nearside Procellarum KREEP (potassium/rare-earth element/phosphorus) Terrane and environs interpreted as having thin, compositionally evolved crust in comparison with the massive feldspathic highlands. The lunar dichotomy may have been caused by internal effects (for example spatial variations in tidal heating4, asymmetric convective processes5 or asymmetric crystallization of the magma ocean6) or external effects (such as the event that formed the South Pole/Aitken basin1 or asymmetric cratering7). Here we consider its origin as a late carapace added by the accretion of a companion moon. Companion moons are a common outcome of simulations8 of Moon formation from a protolunar disk resulting from a giant impact, and although most coplanar configurations are unstable9, a ~1,200-km-diameter moon located at one of the Trojan points could be dynamically stable for tens of millions of years after the giant impact10. Most of the Moon’s magma ocean would solidify on this timescale11, 12, whereas the companion moon would evolve more quickly into a crust and a solid mantle derived from similar disk material, and would presumably have little or no core. Its likely fate would be to collide with the Moon at ~2–3 km s−1, well below the speed of sound in silicates. According to our simulations, a large moon/Moon size ratio (~0.3) and a subsonic impact velocity lead to an accretionary pile rather than a crater, contributing a hemispheric layer of extent and thickness consistent with the dimensions of the farside highlands1, 13 and in agreement with the degree-two crustal thickness profile4. The collision furthermore displaces the KREEP-rich layer to the opposite hemisphere, explaining the observed concentration2, 3.
Posted by Joel Raupe at 11:23 PM