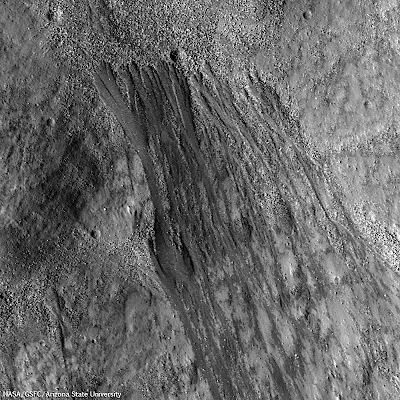 Elongate flows formed during their race towards the floor of Reiner crater, and boulders piled up at their base. Are the flows impact melt or something else? (Downslope is to the upper left.) LROC Narrow Angle Camera observation M135548391LE, LRO orbit 5109, August 4, 2010; field of view 500 meters, See the full-size LROC image release HERE. The tendrils etched into Reiner's inner rim are also easily seen in LROC Observation M142625106L, imaged October 25, 2010 [NASA/GSFC/Arizona State University]. 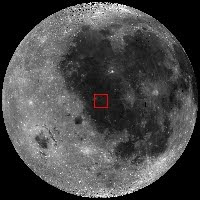 Reiner crater (6.9°N, 305.0°E) in Oceanus Procellarum is Eratosthenian in age because it does not have a visible, high-reflectance ejecta ray system like Copernicus or Tycho craters. Today's Featured Image focuses on the southern wall of Reiner crater.

The flows emplaced along the crater wall are reminiscent of some impact melt features seen on the Moon. They are elongate, slightly lobate, and have many boulders that could have weathered out of them. And they do appear to have flowed downwards into the crater, solidifying on the wall before reaching the crater floor. But are the flows impact melt? 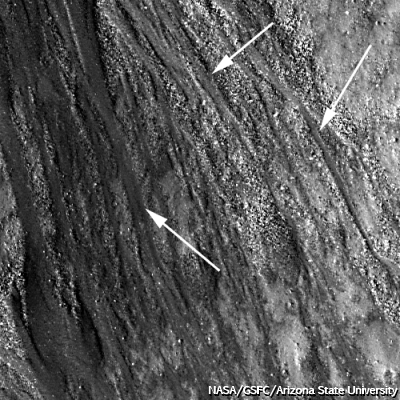 Arrows point to incisions cut into the crater wall by these flows, image field of view 250 meters [NASA/GSFC/Arizona State University].

The elongate morphology of these flows is also similar to that of a dry debris flow. Impact melt would only have the chance to flow downhill once before solidifying, but the flows appear to have been deposited successively during multiple flow periods. Furthermore, the flows also cut through loose material on the crater wall, indicating that the flows formed more recently. These relationships are perhaps more consistent with dry debris flows, than impact melt flows.

Can you find more flows in the full NAC frame? 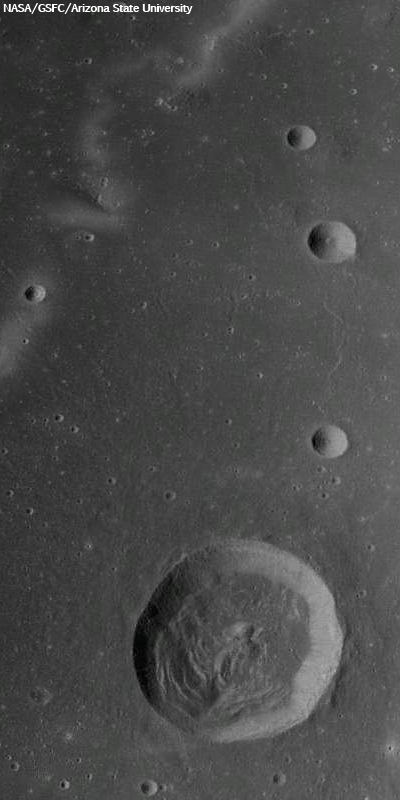 LROC Wide Angle Camera (WAC) monochrome (604nm) mosaic stitched together over four orbital observational opportunities (orbits 5108-5111) at the same as that of the LROC NAC image from which the LROC Featured Image, August 8, 2011, was processed a little over a year earlier. A portion of the Reiner Gamma lunar crustal magnetic anomaly, with its attendant swirl, a long streaming surficial albedo running from the Marius Domes to the north, southwest to the western edge of Oceanus Procellarum, is visible at upper left [NASA/GSFC/Arizona State University].