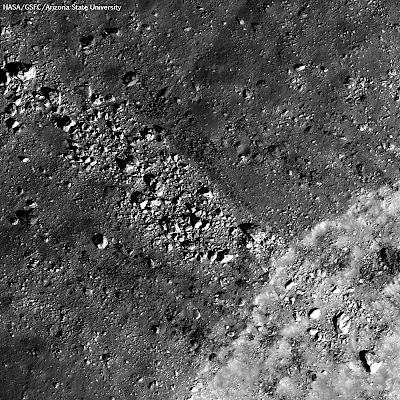 Dozens of boulders, ranging from 10 to more than 30 meter in diameter, are distributed within an ejecta ray close to a crater rim (lower right) located inside the Mare Moscoviense basin (32.52°N, 143.625E°). These boulders represent the deepest material excavated during the crater's formation. From a montage of LROC Narrow Angle Camera (NAC) observations M159013302L & R, field of view is roughly 850 meters; LRO orbit 8568, May 2, 2011. View the full-size LROC Featured Image HERE [NASA/GSFC/Arizona State University]. 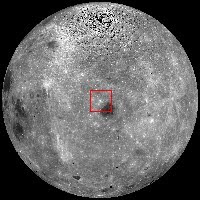 Northeast of Mare Moscoviense, an unnamed Copernican-aged crater has an extensive ejecta blanket (32.56°N, 143.53°E, diameter ~6 km). The ejecta blankets of impact craters provide a useful tool toward relative age dating and the formation of a geologic story for a region when using remotely sensed image data. The presence of a rayed, continuous ejecta blanket surrounding an impact crater indicates that the crater formed relatively recently in lunar geologic time. The distribution of ejecta around the crater can help predict whether the bolide impacted obliquely and from which direction it came. Moreover, if there are reflectance variations in the ejecta blanket, the impact may have exposed material of multiple compositions, and how bouldery or smooth an ejecta blanket appears may help scientists hypothesize the physical properties of the target material (e.g., solid rock, granular regolith, or a combination of both). 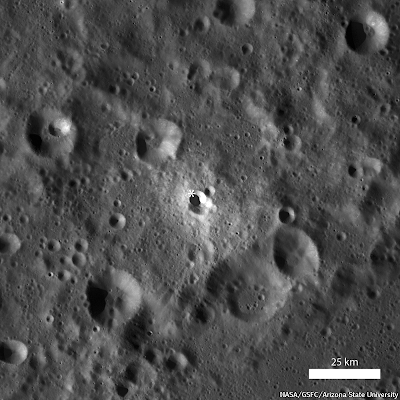 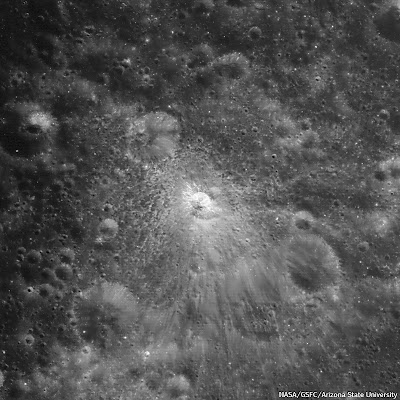 Another WAC image, a 604 nm band mosaic from September 12, 2010, when the local sun was higher and when relief gives way to finer albedo subtleties, demonstrates why this small crater is relatively easy to pick out in small-scale farside imagery. The north shore of "the Sea of Moscow" itself, the floor of the larger impact basin, is just beyond the hills etched by the impact, to the south [NASA/GSFC/Arizona State University].

Ejecta blankets can also provide human explorers an easy means to sample lunar material from depth. Because impact events displace material in a ballistic trajectory from the point of impact, the vertical stratigraphy of the rocks and regolith are exposed within the ejecta blanket in a horizontal manner. Does this make sense? Think about it: when a bolide impacts the surface, the surface regolith is the first material ejected and will travel the farthest. As the energy from impact is dispersed, more material is ejected from the rapidly-forming impact crater, continuing to form the ejecta blanket. The last bit of material ejected will be from the deepest part of the crater and deposited near the crater rim - exactly like those boulders seen in the opening image. What a concept - the ability to create a vertical cross section of an area simply by moving through an ejecta blanket on the surface! 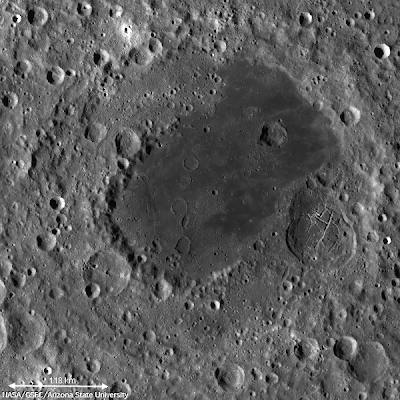 In this smaller-scale, 400 kilometer field of view of a WAC montage released in 2010, stitched from observations at local afternoon illumination, a good mix of relief and albedo features can be seen. The bright crater and its rays, shaped by the anatomy of the landscape where it formed, begin to blend together at this scale [NASA/GSFC/Arizona State University]. 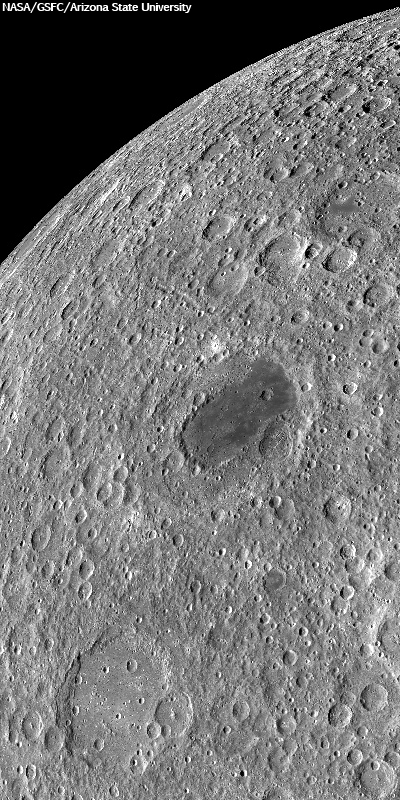 Even in this section taken from a full hemisphere-scale (1600 meter resolution) image of the Moon's farside the area affected by the bright crater's albedo stands out like a star, north of Mare Moscoviense. View the hemisphere-wide LROC WAC montage HERE [NASA/GSFC/Arizona State University].

This concept, using radial traverses of an ejecta blanket to sample vertical stratigraphy, was tested both in the laboratory during the 1960s and by Apollo 14 in 1971. Astronauts Alan Shephard and Edgar Mitchell attempted to reach the Cone crater rim and sampled the ejecta blanket at various locations during their traverse. Unfortunately for them, the gently undulating landscape around Cone crater obscured the crater rim from view and they were forced to return from their traverse without photographing the interior of the crater. However, later analysis of photography from the traverse, paired with orbital images, revealed that they had nearly reached the rim! The astronauts were closer than 30 meters from the crater rim, so their samples probably represent the deepest material excavated by the impact. This experience - and experiment - showed that a radial traverse of crater ejecta was an appropriate method to sample the vertical stratigraphy. The high-resolution LROC NAC images, coupled with derived DTM topography will ensure that future human lunar explorers make it to the crater rim when making a radial traverse of an ejecta blanket!

Take a peek at the full LROC NAC image - can you find reflectance variations within the ejecta blanket that may represent compositional differences from within the crater? Do you see any other bouldery ejecta rays around the rim?