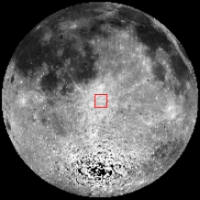 Impact melt commonly forms during impact events on the Moon due to the tremendous energy released during such events.

Melt often forms ponds on crater floors or in nearby exterior depressions, and forms flows as it travels downslope. Today's Featured Image of a young crater in the lunar highlands, at 40.875°S, 355.277°E, appears to have beautifully preserved examples of both forms!

Can we be sure the flows pointed out here are actually frozen impact melt and not debris flows?

One clue is that the flows are not very blocky when most of the crater wall is. Instead the flows appear to have entrained rocks when traveling over blocky sections of the crater. But debris flows can also pick up boulders along the way! Unlike the melt pond the flows do not have a cracked surface, perhaps indicating that formed as flows of granular material? On the other hand the flows have lower reflectance, typically of glasses that form on the surface of impact melt. It is difficult to say which hypothesis is correct without more information!

Can you find more evidence to argue for impact melt or debris flow in the full LROC NAC frame HERE?