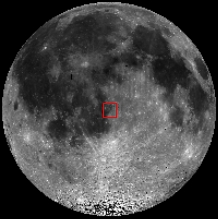 Crater modification is a topic of interest to lunar scientists because most of the impact craters on Earth are heavily degraded. Meteor Crater is the best-preserved and youngest impact crater studied on Earth, and fieldwork spanning as far back as the 1800s has greatly improved the understanding of crater formation and modification. By comparing geologic features on the Moon to those that are well-studied on Earth, scientists can begin to understand the complexity of geologic processes that constantly change the lunar surface.

Granular debris flows are the result of material moving downhill due to gravity. The flows often contain fine-grained material, forming a smooth, fluid-like texture, and may be mistaken for impact melt flows. Today's Featured Image highlights the complex and diverse nature of debris flows that represent erosive events that are likely occurring on the Moon today. Located on the eastern wall of Alpetragius B crater (~10 km diameter) in Mare Nubium, this debris flow (15.119°S, 353.253°E) is composed of multiple channels and different sized materials.

Perhaps the finer-grained debris carved through an older flow composed of the higher reflectance material. This hypothesis may be supported by observations within the image. For example, the rubbly material is visible elsewhere on the crater wall where the finer-grained material is not. The rubbly, higher reflectance material extends beyond the fine-grained, channeled flow (middle right and middle left). Additionally, the fine-grained flow channels cross-cut one another multiple times, but the higher reflectance material does not border those channels. However, additional observations should be made to make sure that the flow in the opening image is representative of the debris flow populations in Alpetragius B and not a special case.

What evidence can you find that to support the hypothesis about debris flow formation in Alpetragius B? Grab your notebooks and take a look at the full LROC NAC image, HERE.