LROC: Sinuous Ridges on the Slope 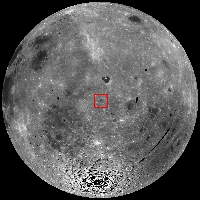 Today's Featured Image involves sinuous ridges observed at the western edge of the mare basalt deposit on the floor of Bolyai crater. Bolyai is a ~100 km diameter crater located at 33.85°S, 126.12°E, about 400 km south of Tsiolkovskiy crater. The northern part of the crater floor is filled by a mare basalt deposit (see WAC context image at the bottom of this post). Notice that the sunlight is from the left side of the image, thus the circular features (craters) are negative relief and sinuous line-features are positive relief.

The ridges show bifurcations at the middle of the image, and two ridge branches extending toward the northeast and southeast of this image gradually become less apparent. The southwestern branch strongly meanders and eventually disappears as well. On the other hand, the northwestern branch extends on the crater slopes all the way along the western boundary of the mare deposit (see the NAC context image below), about 80 to 300 m away from this "shoreline". How did all these ridge systems form? Could they really be "splash marks" like in Tuesday's post, or are they something else?

In many cases, splash marks include boulders that were deposited at the "wave front" of the melt, which is not the case in today's image. The wrinkle ridges, a compressional deformation feature caused by thrust faults, can crosscut each other, which would explain the bifurcation of the ridges in the top image. But then, did the whole western part of the lava pond slip, forming the surrounding wrinkle ridges? Obviously, a series of complicated geologic events happened in this particular mare deposit within Bolyai.


Explore this set of sinuous ridges full LROC NAC frame for yourself, HERE.