LROC: Impacts on the Impact Melts 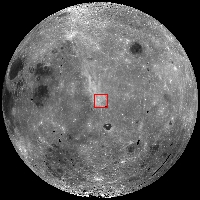 Today's Featured Image looks vaguely like a microscope picture of onion cells (complete with a nucleus and cell walls), but in reality this is an impact melt deposit that extends out of Necho crater (5.25°S, 123.24°E; see whole view of this melt sheet HERE).

In between the network shaped cracks (notice that the sunlight is from left of the image, thus lineations are negative relief), multiple strangely-shaped craters with a central dent surrounded by a flat moat about 15 to 40 m in diameter are observed. They resemble bench craters (e.g. Fresh Bench Crater in Oceanus Procellarum, Bench Crater in Plato), except that they are not quite circular in shape and no radial ejecta is visible. The relatively bigger one near the image center has deeper dent and a petal shaped system of exterior deposits.

These strangely-shaped craters are probably self-secondary craters, formed after the emplacement of the impact melt deposit but before the complete solidification of the molten rocks. The physical properties of unsolidified target might have resulted in these distinctly-shaped craters.