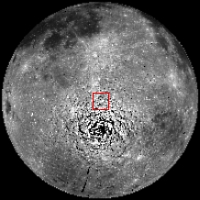 Groupings of boulders are commonly observed at the boundary between crater wall and floor, and tracing boulder trails through LROC images is always a fun pastime. However, the importance of identifying boulders with trails traceable to the boulder origin cannot be emphasized enough when considering future lunar exploration. Previous posts have mentioned the importance of the Station 6 boulder to the Apollo 17 mission because the remote sensing images coupled with the surface samples of the boulder allowed scientists to learn about the local and regional geology of the Taurus-Littrow landing site. The boulders in the opening image would tell a similar story, allowing future human explorers to sample lunar rocks that are otherwise very difficult to obtain.

Moretus crater (70.631°S, 353.977°E, ~114 km diameter) is a complex impact crater found on the southern nearside. A beautiful central peak formed during the impact process, and over geologic time, the central peak was eroded by small impact events. As the rock in the central peak fractures and breaks, pieces travel downhill. Some boulders only made it partway down the central peak slope, while others descended all the way to the crater floor. As you can see by looking at the opening image (70.541°S, 354.221°E), the boulders that made it all the way to the crater floor range in size from about 10 m to 40 m in diameter and have different shapes. Where a boulder rests is dependent on many factors that include the size and shape as well as how the boulder was perturbed in the first place - maybe a small meteorite impacted the peak at just the right angle and velocity to dislodge the boulder or maybe a nearby impact created shock waves that jiggled the boulder loose. However, because gravity is ever-present, it is probable that at some point in the future, all the boulders on the central peak slope will fall.

Boulders such as these are incredibly valuable for future exploration because they represent material from the central peak (pushed up from depth during crater formation) and their origin can be determined by tracing the trails uphill. Of course, it would be a mighty feat to ascend to the summit of the central peak of a crater like Moretus, Tycho, or Copernicus; however, lunar scientists would all probably agree that obtaining samples from a wide range of geologic units and regions on the Moon holds high scientific interest and merit and is absolutely necessary.

Put yourself in a future astronaut's shoes and traverse the full LROC NAC image, HERE. Which boulder (or boulders) would you want to sample and why?