CINCINNATI (AP) — Neil Armstrong was a quiet self-described nerdy engineer who became a global hero when as a steely-nerved pilot he made "one giant leap for mankind" with a small step on to the moon. The modest man who had people on Earth entranced and awed from almost a quarter million miles away has died. He was 82.

Armstrong died following complications resulting from cardiovascular procedures, a statement Saturday from his family said. It didn't say where he died.

Armstrong commanded the Apollo 11 spacecraft that landed on the moon July 20, 1969, capping the most daring of the 20th century's scientific expeditions. His first words after setting foot on the surface are etched in history books and the memories of those who heard them in a live broadcast.

"That's one small step for (a) man, one giant leap for mankind," Armstrong said.

In those first few moments on the moon, during the climax of heated space race with the then-Soviet Union, Armstrong stopped in what he called "a tender moment" and left a patch commemorate NASA astronauts and Soviet cosmonauts who had died in action.

"It was special and memorable but it was only instantaneous because there was work to do," Armstrong told an Australian television interviewer in 2012.

"The sights were simply magnificent, beyond any visual experience that I had ever been exposed to," Armstrong once said.

The moonwalk marked America's victory in the Cold War space race that began Oct. 4, 1957, with the launch of the Soviet Union's Sputnik 1, a 184-pound satellite that sent shock waves around the world.

Although he had been a Navy fighter pilot, a test pilot for NASA's forerunner and an astronaut, Armstrong never allowed himself to be caught up in the celebrity and glamor of the space program.

"I am, and ever will be, a white socks, pocket protector, nerdy engineer," he said in February 2000 in one of his rare public appearances. "And I take a substantial amount of pride in the accomplishments of my profession."

A man who kept away from cameras, Armstrong went public in 2010 with his concerns about President Barack Obama's space policy that shifted attention away from a return to the moon and emphasized private companies developing spaceships. He testified before Congress and in an email to The Associated Press, Armstrong said he had "substantial reservations," and along with more than two dozen Apollo-era veterans, he signed a letter calling the plan a "misguided proposal that forces NASA out of human space operations for the foreseeable future." 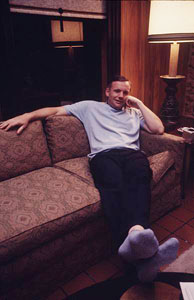 When he appeared in Dayton in 2003 to help celebrate the 100th anniversary of powered flight, he bounded onto a stage before 10,000 people packed into a baseball stadium. But he spoke for only a few seconds, did not mention the moon, and quickly ducked out of the spotlight.

He later joined former astronaut and Sen. John Glenn to lay wreaths on the graves of Wilbur and Orville Wright. Glenn introduced Armstrong and noted it was 34 years to the day that Armstrong had walked on the moon.

"Thank you, John. Thirty-four years?" Armstrong quipped, as if he hadn't given it a thought.

At another joint appearance, the two embraced and Glenn commented: "To this day, he's the one person on Earth, I'm truly, truly envious of."

Armstrong's moonwalk capped a series of accomplishments that included piloting the X-15 rocket plane and making the first space docking during the Gemini 8 mission, which included a successful emergency splashdown.

In the years afterward, Armstrong retreated to the quiet of the classroom and his southwest Ohio farm. Aldrin said in his book "Men from Earth" that Armstrong was one of the quietest, most private men he had ever met.

In the Australian interview, Armstrong acknowledged that "now and then I miss the excitement about being in the cockpit of an airplane and doing new things."

At the time of the flight's 40th anniversary, Armstrong again was low-key, telling a gathering that the space race was "the ultimate peaceful competition: USA versus U.S.S.R. It did allow both sides to take the high road with the objectives of science and learning and exploration."

Glenn, who went through jungle training in Panama with Armstrong as part of the astronaut program, described him as "exceptionally brilliant" with technical matters but "rather retiring, doesn't like to be thrust into the limelight much."

Derek Elliott, curator of the Smithsonian Institution's U.S. Air and Space Museum from 1982 to 1992, said the moonwalk probably marked the high point of space exploration.

The manned lunar landing was a boon to the prestige of the United States, which had been locked in a space race with the former Soviet Union, and re-established U.S. pre-eminence in science and technology, Elliott said.

"The fact that we were able to see it and be a part of it means that we are in our own way witnesses to history," he said.

The 1969 landing met an audacious deadline that President Kennedy had set in May 1961, shortly after Alan Shepard became the first American in space with a 15-minute suborbital flight. (Soviet cosmonaut Yuri A. Gagarin had orbited the Earth and beaten the U.S. into space the previous month.)

"I believe this nation should commit itself to achieving the goal, before the decade is out, of landing a man on the moon and returning him safely to Earth," Kennedy had said. "No single space project in this period will be more impressive to mankind, or more important to the long-range exploration of space; and none will be so difficult or expensive to accomplish."

The end-of-decade goal was met with more than five months to spare. "Houston: Tranquility Base here," Armstrong radioed after the spacecraft settled onto the moon. "The Eagle has landed."

"Roger, Tranquility," future Apollo 16 lunar module pilot Charlie Duke radioed back, "we copy you on the ground. You've got a bunch of guys about to turn blue. We're breathing again. Thanks a lot."

The third astronaut on the mission, Michael Collins, circled the moon in the mother ship Columbia 60 miles overhead while Armstrong and Aldrin went to the moon's surface.

In all, 12 American astronauts walked on the moon between 1969 and the last moon mission in 1972.

For Americans, reaching the moon provided uplift and respite from the Vietnam War, from strife in the Middle East, from the startling news just a few days earlier that a young woman had drowned in a car driven off a wooden bridge on Chappaquiddick Island by Sen. Edward Kennedy. The landing occurred as organizers were gearing up for Woodstock, the legendary three-day rock festival on a farm in the Catskills of New York.

Armstrong was born Aug. 5, 1930, on a farm near Wapakoneta in western Ohio. He took his first airplane ride at age 6 and developed a fascination with aviation that prompted him to build model airplanes and conduct experiments in a homemade wind tunnel.

As a boy, he worked at a pharmacy and took flying lessons. He was licensed to fly at 16, before he got his driver's license.

Armstrong enrolled in Purdue University to study aeronautical engineering but was called to duty with the U.S. Navy in 1949 and flew 78 combat missions in Korea.

After the war, Armstrong finished his degree from Purdue and later earned a master's degree in aerospace engineering from the University of Southern California. He became a test pilot with what evolved into the National Aeronautics and Space Administration, flying more than 200 kinds of aircraft from gliders to jets.

Armstrong was accepted into NASA's second astronaut class in 1962 — the first, including Glenn, was chosen in 1959 — and commanded the Gemini 8 mission in 1966. After the first space docking, he brought the capsule back in an emergency landing in the Pacific Ocean when a wildly firing thruster kicked it out of orbit.

Armstrong was backup commander for the historic Apollo 8 mission at Christmastime in 1968. In that flight, Commander Frank Borman, and Jim Lovell and Bill Anders circled the moon 10 times, and paving the way for the lunar landing seven months later.

Aldrin said he and Armstrong were not prone to free exchanges of sentiment.

"But there was that moment on the moon, a brief moment, in which we sort of looked at each other and slapped each other on the shoulder ... and said, 'We made it. Good show,' or something like that," Aldrin said.

An estimated 600 million people — a fifth of the world's population — watched and listened to the landing, the largest audience for any single event in history.

Parents huddled with their children in front of the family television, mesmerized by what they were witnessing. Farmers abandoned their nightly milking duties, and motorists pulled off the highway and checked into motels just to see the moonwalk.

Television-less campers in California ran to their cars to catch the word on the radio. Boy Scouts at a camp in Michigan watched on a generator-powered television supplied by a parent.

Afterward, people walked out of their homes and gazed at the moon, in awe of what they had just seen. Others peeked through telescopes in hopes of spotting the astronauts.

In Wapakoneta, media and souvenir frenzy was swirling around the home of Armstrong's parents.

"You couldn't see the house for the news media," recalled John Zwez, former manager of the Neil Armstrong Air and Space Museum. "People were pulling grass out of their front yard."

Armstrong, Aldrin and Collins were given ticker tape parades in New York, Chicago and Los Angeles and later made a 22-nation world tour. A homecoming in Wapakoneta drew 50,000 people to the city of 9,000.

In 1970, Armstrong was appointed deputy associate administrator for aeronautics at NASA but left the following year to teach aerospace engineering at the University of Cincinnati.

He remained there until 1979 and during that time bought a 310-acre farm near Lebanon, where he raised cattle and corn. He stayed out of public view, accepting few requests for interviews or speeches.

"He didn't give interviews, but he wasn't a strange person or hard to talk to," said Ron Huston, a colleague at the University of Cincinnati. "He just didn't like being a novelty."

Those who knew him said he enjoyed golfing with friends, was active in the local YMCA and frequently ate lunch at the same restaurant in Lebanon.

In February 2000, when he agreed to announce the top 20 engineering achievements of the 20th century as voted by the National Academy of Engineering, Armstrong said there was one disappointment relating to his moonwalk.

"I can honestly say — and it's a big surprise to me — that I have never had a dream about being on the moon," he said.

From 1982 to 1992, Armstrong was chairman of Charlottesville, Va.-based Computing Technologies for Aviation Inc., a company that supplies computer information management systems for business aircraft.

He then became chairman of AIL Systems Inc., an electronic systems company in Deer Park, N.Y.

Armstrong married Carol Knight in 1999, and the couple lived in Indian Hill, a Cincinnati suburb. He had two adult sons from a previous marriage.

Thanks for sharing fabulous information.