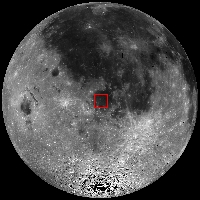 Today's Featured Image shows off a degraded small crater (400 m in diameter) that appears to have been partly flooded by a low reflectance material. This crater is found 1.5 km south of the southern rim of Doppelmayer J crater (5.68 km in diameter), in Mare Humorum. The boulder-rich portion in the image corresponds to the bottom of an unnamed small crater. Following the slope of this small crater cavity, the low reflectance material appears to have flowed in a southeast direction. The distal edge of this dark deposit is on the top of several boulders, indicating that the small crater preexisted before the emplacement of the dark material. What is this material? Where did it came from?

One likely answer is that an impact melt flow from Doppelmayer J invaded this crater. However, the deposit does not have any cracks nor stream lines which are typical melt flow features. Perhaps a long period of micro-meteorite bombardment degraded the original surface textures disguising the true origin of this deposit.

Explorer this dark feature and surrounding geology in the full NAC frame yourself, HERE.