University of Alabama team readies for 3rd NASA Lunabotics competition at KSC, May 21-27

Alabama Lunabotics, a team of students from The University of Alabama and Shelton State Community College, will compete in the 3rd annual NASA Lunabotics Mining Competition, May 21-27, at the Kennedy Space Center in Florida.

Competing against 66 teams from all over the world, the University of Alabama team builds on past solid showings, placing fourth last year.

Their remote-operated robot is designed to collect at least 10 kilograms of a lunar regolith simulant in 10 minutes. As Apollo astronauts learned, talcum-grained, but highly abrasive lunar dust (and NASA's proxies) presents an immediate engineering test

Contest judging will be based on their vehicle's weight, the rate and weight of material excavated, moved and redeposited, and bandwidth used in teleoperation. Teams will be judged on its engineering write-ups and less tangible qualities such as "community outreach, team spirit and the multidisciplinary level of the team."

"We decided to do a complete re-design of our robot because of the change in dimensions after last year's competition," writes the team on their website. "Our competition robot from last year is used as an educational tool. We carried several of the concepts over from last year, one of them being a sweeping wheel design." 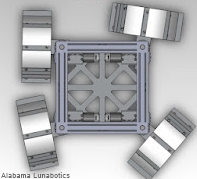 One of the problems with driving on an extremely powdery and soft surface like the moon is gaining traction.

Conventional steering styles dig into the driving surface while turning. Skid-steering, like a tank, is "exceptionally bad with this, especially when your vehicle has a large mass."

Because the NASA Lunabotics competition revolves around mining and transporting, teams are guaranteed "high mass scenarios." The Alabama Lunabotics teams has chosen to operate each wheel independently, and to sweep them to turn in one spot, or move sideways, while maintaining a "positive driving style."


Alabama Lunabotics sneak-preview video spotlighting "The Base"
Posted by Joel Raupe at 4:15 PM