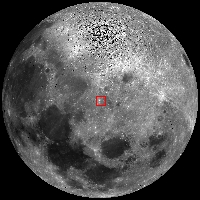 Lunar soil of high and low reflectivity often contrast in spectacular ways where recent impacts have disturbed the regolith.

This small (3 kilometers in diameter) crater, just north of Chevallier near Lacus Temporis, demonstrates the effect that bright rays can have on the surrounding darker target material.

Living on Earth, we tend to forget the role that the Earth's atmosphere and magnetic field play in protecting us from solar wind, micrometeorites, cosmic rays, and other high-energy interactions. Because the Moon has no atmosphere and no magnetic field, its surface receives the full brunt of these effects. These potentially deadly forces were no small concern for the Apollo astronauts whose only protection from them were the thin layers of their space suits when on the Moon, or the thin hulls of their Command and Lunar Modules when in flight!

Over time, iron in silcates (Fe2+) is slowly reduced to iron metal and vapor (Fe0) deposited on mineral grains by high energy collisions with solar wind particles. The iron metal is darker and redder than its parent mineral so the lunar soil slowly darkens with time. This phenomenon, sometimes called space weathering, affects only a thin surface layer of the regolith, and is easily disturbed. Anything disrupting this layer tends to expose unweathered material of higher reflectance. Thus the ejecta of a young impact crater will often produce an irregular veneer of light material intermingled with the lower reflectance materials of the older target layer beneath. The resulting dark and light patterns can be very beautiful.

Stay tuned for another example of reflectivity contrast on the Moon in tomorrow's Featured Image post!

Explore the full NAC image HERE. Other examples of high-contrast surface deposits can be seen in Action Shot, Polka-dot Ejecta, Dark Wisps in Copernicus, Ejecta Sweeps the Surface, and Dark-haloed crater in Mare Humorum.
Posted by Joel Raupe at 7:58 PM