LROC: Boulder on the Edge 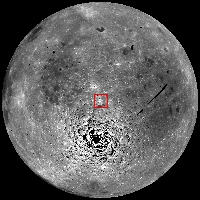 A boulder rests on the rim of an unnamed fresh crater, whose center is located at 66.615°S, 128.611°E. The boulder is partially covered in a layer of impact melt (dark smooth material). Small pieces of bare rock are visible in the impact melt as high reflectance dots in the relatively lower reflectance melt deposit.