LROC: A Beautiful Impact on the rim of Lomonosov 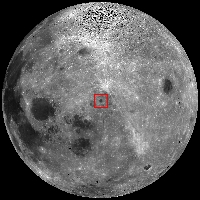 Yesterday's Featured Image post focused on regolith of contrasting reflectivity within the ejecta blanket of a 3 kilometer in diameter lunar impact crater.

Today's post shows another example of recently disturbed lunar regolith, but associated with a crater only 80 meters in diameter.

Impacts from space debris occur randomly across the lunar surface, and the target for this event just happened to be a fault slump along the high western wall of Lomonosov crater in the farside highlands.


Once again we see space-weathered, low-albedo deposits mixing with fresher ("optically immature") materials of higher albedo excavated from beneath the surface layer.

Because of space weathering the Moon is actually a relatively dark object in the solar system. Its overall low reflectance is not apparent to the human eye when seeing the Moon from Earth at night because the Moon is in direct sunlight against the inky black background of Space. In spacecraft images showing the Earth-Moon system (properly exposed as a pair) the low albedo of the Moon becomes obvious.

Lomonosov may be a highland crater, but its floor more closely resembles a mare deposit, being composed of a smooth lava plain. Compare Lomonosov with Plato crater in the 29 May 2012 post. Some of the brighter patches of material in the northernmost portion of the floor are ejecta from the young crater Giordano Bruno to the northeast, demonstrating once again the effects on albedo that recent craters can have.

Examine the full NAC frame HERE. Additional examples of recent small craters can be found in On the Shore of the Bay of Rainbows, in Recent Impact in Oceanus Procellarum, and Crater in 3D!
Posted by Joel Raupe at 8:13 PM