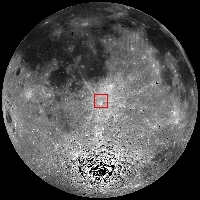 The Lunar Orbiters (1966-1968) photographed Tycho crater in 1966 and 1967 and first revealed the beautiful state of preservation of this ~80 km diameter impact crater. Geologists saw sharp, craggy slopes in the crater walls and central peak, some form of ponded liquid and preserved flows, and a labyrinth of fractures in the rough, flat floor. What liquid flowed and ponded inside and outside the crater? Initially geologists hypothesized that the Tycho impact event triggered an upwelling of lava, and the ponds and flows were frozen volcanic forms.

Later it was determined that the hypothesized volcanic ponds and lakes and flows were indeed related to the formation of the crater, but not as volcanic eruptions of subsurface magma. Rather, they were accumulations of massive amounts of lunar rock that was melted as the Tycho asteroid (or comet) slammed into the Moon and released unimaginable amounts of kinetic energy, in an instant. It was only in 1960 that Gene Shoemaker and colleagues proved that Meteor Crater (aka Barringer crater) near Winslow, Arizona, was formed by an asteroid impact. Thus the idea that many craters on the Moon (and Earth) were formed by impacts was only coming into widespread acceptance at the time of the Lunar Orbiter missions. Today we have a growing catalog of impact melt deposits from many young craters across the face of the Moon.

LROC captured a spectacular oblique view of Tycho's central peak on 10 June 2011 looking east-to-west. In today's Featured Image the view is from the other side, and shows the exterior flanks as well as the crater interior. Many impact melt features are easily seen both inside the crater and on its flanks.

Impact melt is sometimes seen as a thin crust on crater walls and peaks. It can be recognized by its lower reflectance, smooth texture that hugs the substrate, and parallel fractures. Much of the central peak was coated in melt (see the figures above and below) and the previous oblique LROC Tycho peak image.

Many of the features are similar to those seen in volcanic flows that pool in low spots of the landscape. How do we know that what we see here isn't volcanic in origin? There are several lines of evidence. First, the locations on top of and coating central the central peaks, on the crater rim, and in ponds on the terraces are consistent with where ejected melt-rock would land, but not with where volcanic eruptions would occur. Second, the composition of the material in this region is that of typical highlands material, inconsistent with all other known lunar volcanic deposits. Finally, the age of the Tycho impact crater is thought to be around 100 million years, which is quite young for a feature on the Moon. By this time, the Moon is thought to have cooled so substantially that it no longer had the internal heat to produce molten volcanic material that could reach the surface. The youngest volcanic deposits on the surface are on the order of a billion years old.

Today's featured image provides a beautiful complementary view of the Moon's ongoing surface evolution via impact cratering. Eventually, Tycho's features will be ground down by subsequent impacts, and new craters with their own spectacular peaks and pools of melt will replace Tycho as one of the most striking features on the Moon. Explore this new spectacular oblique image of Tycho crater and find the impact melt deposits hiding high and low, inside and outside, of the crater.