LROC: Melt on a Rim 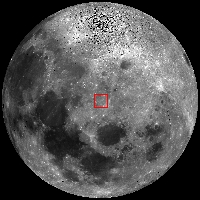 So much energy is released when an asteroid or comet slams into the Moon that some of target rock (the Moon) is melted. For large craters, such as Tycho or Copernicus, the impact event responsible for forming these craters was large enough to generate melt that coated and covered the crater floor, and ejected melt pooled and flowed outside the crater cavity. Tycho and Copernicus are typical examples of amazing impact melt deposits, but LROC NAC images show that impact melt is widespread and quite common to lunar impact craters. But don't be fooled into thinking that impact melt will be found only on the crater floor and in impact melt ponds exterior to the crater just because of the Tycho and Copernicus examples - the impact process is dynamic, so surveying the entire crater for the presence of impact melt is a must. In fact, channels, flows, and veneers are often found in NAC images.

Today's Featured Image is one such example, where an unnamed ~4.2 km diameter crater located in the nearside highlands (38.112°N, 53.052°E; northeast of Mare Tranquillitatis) is heavily veneered with impact melt. Taking a look at the southern crater rim, although portions of the crater wall are disaggregating into bouldery, granular materials through erosional processes, much of the wall is smoothed with an impact melt veneer. Additionally, there is an area of very smooth impact melt with a rounded, lobate boundary reminiscent of flow. Shadows suggest that this flow-like feature may have some topographic relief and is probably not simply a thin layer of impact melt covering the crater wall material. These observations provide evidence for impact melt flow from the crater rim back into the crater, sometimes called flowback. How might this feature have formed? When impact melt is ejected from the crater during the last stages of crater formation, its landing place is determined by the energy remaining from the impact event. If there is substantial energy remaining, the melt will probably be ejected to the crater exterior and may form ponds, flows, and veneers. But if there is not quite enough energy to push the melt beyond the crater rim, the melt may land at or near the rim, and then gravity takes over. If enough melt is emplaced at the rim and it is hot enough to flow, the melt may coalesce and begin to flow downhill, perhaps forming a morphology similar to the one observed in the opening image.


Of note is a 20 m diameter impact crater near the edge of the flow lobe because the morphology of the crater suggests that it may have formed while the melt was at least partially molten. The crater has relatively smoothed and softened morphology and lacks an ejecta blanket. When impacts into solid target rock occur, the excavated material is blocky. While it is possible that there is now a very thin layer of regolith overlying the impact melt (because the parent crater is geologically young), a crater of this size would have punched through the thin regolith to expose the solid rock beneath. Now, the impact occurred on a slope, so one could argue that the ejected material rolled downhill. However, this hypothesis does not fully explain the rounded, degraded lower portion of the crater rim, which is smooth and mostly block-free, and also does not explain the absence of a well-developed ejecta blanket. So, based on the available data and observations, the explanation of crater formation while the melt was still partially molten is consistent with the observations, but additional observations, such as studying the morphology of other craters that formed in impact melt deposits, would be useful to definitively determine when this small impact crater formed.

Discover the impact melt veneers, flows, and channels for yourself in the full LROC NAC frame, HERE.

Related Posts:
Lichtenberg B Flow
Outside of Giordano Bruno
On the Floor of Thales
Posted by Joel Raupe at 7:01 PM

As day/night time temperatures cycle up and down, the ice dams and icicles continue to grow.