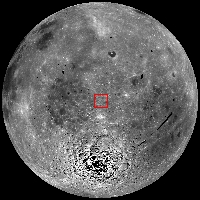 Boulder trails are one of many examples of how gravity acts on, and changes, the lunar surface over time. Boulder trails are often observed on the interior walls and central peaks of craters because the change in elevation and slope from crater rim to floor is large. Boulder movement on the Moon is highly sensitive to inertia, so when a boulder is knocked loose by an impact or moonquake, it will keep moving until something changes its speed or velocity. But most boulder trails observed on the Moon are relatively linear, forming a more or less dashed line appearance from high elevation to low, so why are the boulder trails in the opening image curved?

Take a moment to think, consider the opening image once again, and then use the LROC WAC image below for context.

The first clue is in the opening image; the landscape surrounding the boulders is relatively smooth and lightly cratered with small impacts - definitely not the interior crater wall of the nearby fresh crater. The WAC context image provides another clue; these boulders are located on the degraded crater wall of Pikel'ner S crater (49.514°S, 121.122°E). So what is the likely story? Given the location of these boulders with curved trails and their close association with a nearby fresh impact crater, these boulders were probably ejected from the crater cavity, flung far afield, and landed on the degraded interior wall slope of Pikel'ner S crater.

The boulder trails are continuous and smoothed, like a marble rolled down a pile of sand, as opposed to disconnected, like a marble bounced down the same sand pile. These observations may provide information about boulder velocity, boulder shape, angle at which the boulder struck the surface, and the coherence of the surface (fluffy versus compacted regolith). Upon landing, the boulders began to travel downhill, forming curved paths according to the local slope, and the small wiggles observed in the trails likely represent the irregular shape of the boulders (because real rocks are not spherical like marbles). The scenario outlined above is strengthened by the observation that the four boulders, which range in size from ~7 m to 9 m, have similarly-shaped curving paths that are sub-parallel. What an exciting geologic location!

Can you find other curved boulder trails in the full LROC NAC image? If so, do your observations support the hypothesis set forth above - why or why not?