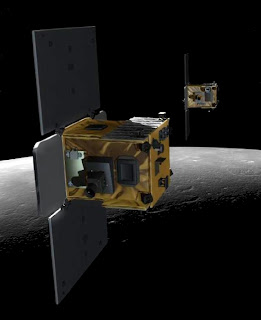 Ebb and Flow have completed their prime mission earlier than expected. The mission team of NASA's Gravity Recovery and Interior Laboratory (GRAIL) mission, with twin probes named Ebb and Flow, is now preparing for extended science operations starting Aug. 30 and continuing through Dec. 3, 2012.

The GRAIL mission has gathered unprecedented detail about the internal structure and evolution of the moon. This information will increase our knowledge of how Earth and its rocky neighbors in the inner solar system developed into the diverse worlds we see today.

Since March 8, the spacecraft have operated around the clock for 89 days. From an orbit that passes over the lunar poles, they have collected data covering the entire surface three times. An instrument called the Lunar Gravity Ranging System onboard each spacecraft transmits radio signals that allow scientists to translate the data into a high-resolution map of the moon's gravitational field. The spacecraft returned their last data set of the prime mission May 29. The instruments were turned off at 1 p.m. EDT when the spacecraft were 37 miles (60 kilometers) above the Mare Nectaris.

"Many of the measurement objectives were achieved from analysis of only half the primary mission data, which speaks volumes about the skill and dedication of our science and engineering teams," said Maria Zuber, principal investigator of GRAIL at the Massachusetts Institute of Technology in Cambridge. "While there is a great deal of work yet to be done to achieve the mission's science, it's energizing to realize that what we traveled from Earth to the moon for is right here in our hands."

"GRAIL delivered to Earth over 99.99 percent of the data that could have been collected, which underscores the flawless performance of the spacecraft, instrument and the Deep Space Network," said Zuber.

Both spacecraft instruments will be powered off until Aug. 30. The spacecraft will have to endure a lunar eclipse on June 4. The eclipse and the associated sudden changes in temperature and the energy-sapping darkness that accompanies the phenomena were expected and do not concern engineers about the spacecraft's health.

"Before launch, we planned for all of GRAIL's primary mission science to occur between lunar eclipses," said David Lehman, project manager of GRAIL from NASA's Jet Propulsion Laboratory (JPL) in Pasadena, Calif. "But now that we have flown Ebb and Flow for a while, we understand them and are confident they can survive these eclipses in good shape."

The extended mission goal is to take an even closer look at the moon's gravity field. To achieve this, GRAIL mission planners will halve their current operating altitude flying at the lowest altitude that can be safely maintained.

"Orbiting at an average altitude of 14 miles (23 kilometers) during the extended mission, the GRAIL twins will be clearing some of the moon's higher surface features by about 5 miles (8 kilometers)," said Joe Beerer, GRAIL's mission manager. "If Ebb and Flow had feet, I think by reflex they'd want to pull them up every time they fly over a mountain."

Along with mission science, GRAIL's MoonKAM (Moon Knowledge Acquired by Middle school students) education and public outreach program is also extended. To date over 70,000 student images of the moon have been obtained. The MoonKAM program is led by Sally Ride, America's first woman in space, and her team at Sally Ride Science in collaboration with undergraduate students at the University of California in San Diego.

The GRAIL mission is managed by JPL for NASA's Science Mission Directorate in Washington. The mission is part of the Discovery Program managed at NASA's Marshall Space Flight Center in Huntsville, Ala. NASA's Deep Space Network is an international network of antennas that supports interplanetary spacecraft missions and radio and radar astronomy observations for the exploration of the solar system and the universe. The network also supports selected Earth-orbiting missions. Lockheed Martin Space Systems in Denver built the spacecraft.
Posted by Joel Raupe at 3:41 PM