Much of the Plato crater walls exhibit relatively smooth slopes. This small area, however, displays an eye-catching pattern of rocks protruding from the surrounding surface.

The outcrop represents a locally resistant bedrock unit on the steeply sloping walls. Note how the rock protrusions appear to be aligned in horizontal rows. Does this mean that the rocks are layered?

Compare with other images of clearly layered units in crater walls.

From the context images above and below, we see that the rocks have likely been sculpted by slumping in the crater walls, which also accounts for wall smoothness in the area surrounding the outcrop. Plato is a 109-km diameter crater that is isolated from Mare Imbrium by these walls. Its floor is filled with lava deposits like those of Imbrium and other mares, but there is no direct connection to other mare deposits. Lava must have entered Plato through fissures in its floor, and filled the crater to the level we see today. What a fine vantage point this balcony of natural benches would have provided to the fortunate astronaut were it possible to travel through time to watch the floor of Plato flood with orange-red lava more than three and half billion years ago!

On a good night, Plato can be seen clearly through a backyard telescope within the terrain between Mare Imbrium and Mare Frigoris. 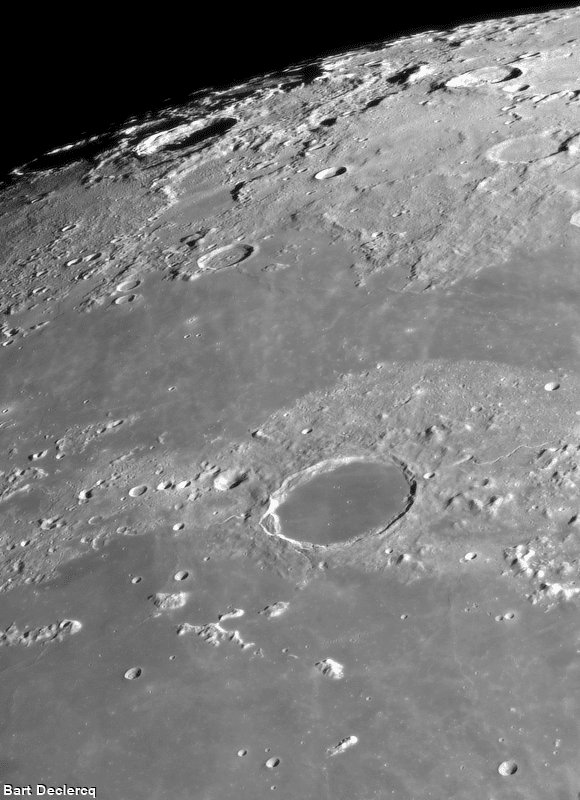 Other examples of rock outcrops exposed by impact craters on the Moon can be examined in the following Featured Image posts: Layering in Messier A, At the Top of the Avalanche, and Lava Flows Exposed in Bessel Crater.
Posted by Joel Raupe at 9:28 PM