Fractures and boulders on the floor of De Forest 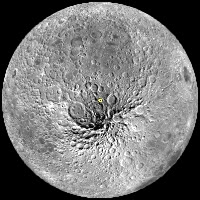 The topographic low, east of the central peak, was largely coated with hot impact melt which formed a hard crust as it cooled; a portion of this melt is seen in the opening image.

Much of the area of the opening image is covered by numerous boulders, some of which are up to approximately 15 meters across.

The smooth surface extending in lower-left to upper-right is impact melt that cooled to form solid rock, and is now fractured in regular patterns along the edge. Impact melt that was splashed on the crater's walls and its central peak formed a coating that quickly cooled to solid rock.

Later, it is likely that nearby moonquakes caused these brittle rock coatings to fracture, providing the source of boulders we now see on the lower reaches of the crater floor.

As you can see in the following full NAC frame, an enormous number of similar boulders are found along the smooth melt deposits on the floor of De Forest crater.

Explore this boulder-rich crater in the full NAC frame, HERE.