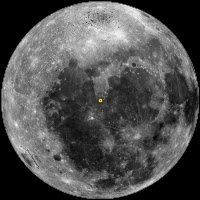 Today's feature is an irregularly shaped, steep-walled mare depression that looks a bit like a tadpole; it is about 8 km long and located at the northwest end of a 60-km long, sinuous chain of pits (35.284°N, 315.901°E) northwest of Gruithuisen crater.

The pit chain was one of the first and most spectacular candidates proposed for an intact lunar lava tube (i.e., one with uncollapsed segments).

This depression may be the source vent for the lava flows that host the pit chain (see image below).

Volcanic vents tend to be sub-circular or elongate, like today's feature, which is roughly 600 meters deep and has steep inner walls (~35° slopes). Similarly sized and shaped features include examples near Sulpicius Gallus crater and the Orientale basin. Dark, low-albedo, materials surrounding the Sulpicius Gallus and Orientale features suggest formation through explosive pyroclastic eruptions; however, further exploration is still needed to confirm this interpretation.

Collapse pits, with sharp and nearly vertical walls, like the one in the Marius Hills (shown in a previous post) suggest fairly recent collapse of ancient lava tubes. The chain of pits near Gruithuisen, however, has more subdued topography, and likely formed earlier in the history of the Moon (perhaps more than 1 or 2 billion years ago).

Intact lava tubes have long been thought to be important to future exploration. Many have speculated that uncollapsed portions of lava tubes could be used to shield explorers from harmful radiation, as well as provide a relatively warm and stable environment that is buffered from the large temperature variations at the surface.

Many hope that uncollapsed lava tubes will be located near volcanic materials that can be used in construction or energy-generation processes. However, we still have not explored inside any lava tubes on another planet, though many engineers and scientists are currently working to enable such activities. In the meantime, LROC images combined with other data sets, can be used to search for additional lava tube candidates.

Continue Reading about this fascinating lava tube candidate and the sinuous pit chain, or explore the Sulpicius Gallus vent and Orientale Basin vent in more detail.

Even more to explore: