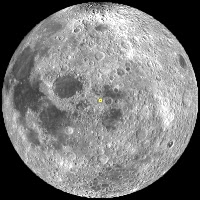 The larger teardrop patch in the opening picture has a sharp boundary along its western edge, perhaps implying a partially elevated surface relative to the surrounding high-reflectance ejecta.

Note the faint high-reflectance ray overlying this patch, indicating that the low reflectance patch was emplaced before the completion of the impact event. Similar dark patches that are smaller and less pronounced are found at the top of the opening image.

How were these peculiar dark patches formed? If these patches are elevated, they could represent preexisting flat dark mounds that were swept by the saltating ejecta materials. Or the excavation of low-reflectance materials by the impact could have been thrown out in one direction and resulting in this unusual patch of ground. If, on the other hand, the patches are topographic lows rather than elevated, these depressions could have simply been shielded as the ejecta passed overhead. It is also possible that the topography of the rim controlled the direction of the outthrown ejecta such that there were "no ejecta" zones that resulted in the dark patches.

High resolution topography would really help unravel this mystery! NAC to the rescue! The LROC targeted this area for upcoming NAC stereo pairs from which meter-scale topography will be extracted. In a few months, we will post the topography and will see if we solved the mystery!