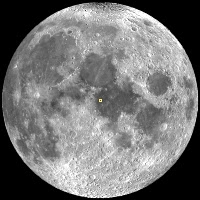 There are several distinguishing properties of craters that help lunar scientists determine their ages. As craters get older their appearance changes through exposure to solar wind bombardment and other impacts (collectively called space weathering), and even gravity has an effect.

Effects of the solar wind lower the reflectance of the surface; so regolith (soil) that was excavated by recent impacts has higher reflectance than the background surface, this is why small young craters have visible crater rays. New impacts pulverize rocks that were ejected during the formation of an older crater and disturb the shape by causing moonquakes. Also, gravity works to alter the shape of a crater by pulling material down its walls in a process called slumping, this causes craters to have a smoother appearance.

Today's Featured Image showcases two similarly sized adjacent craters (each ~500 m in diameter) located in Mare Tranquillitatis (see WAC context image below) with very different appearances. The area surrounding the top crater is littered with boulders in all directions. Wheras the more southerly crater has only a few rocks near its rim. Where did the boulders come from in the first place? And did the lower crater originally have boulders?

Since the mare basalt formed from layers of lava that hardened into solid rock, it is likely the boulders are coherent fragments of those thick layers (a few to tens of meters thick) that were broken up and ejected during the impact event. Since these two craters are so close and both formed in the mare it is very likely that the lower crater also had a large grouping of boulders in its ejecta field. The dissimilarity between these two craters is most likely due to age difference. Over time (perhaps a couple of billion years) the original boulders around the lower crater were slowly ground down by micro-meteorite bombardment - think of this process as cosmic sand-blasting! The boulders around the younger crater (top) have not had time to be pulverized by other impacts, but stick around for a billion years and you can watch these boulders slowly disappear!