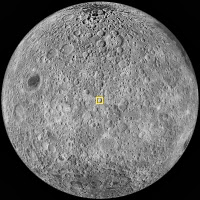 The opening image highlights a fractured pond of impact melt rock inside Jackson crater (72 km diameter). This prominent farside crater is known by its prominent ray system and large amount of impact deposits. Melt pooled not only at the bottom of the crater floor, but also on terraces of the interior wall.

The fractured melt sheet in the opening image is found amongst a grouping of melt lakes on a western crater wall terrace (see WAC context image below).

Detached fragments from the main body of melt sheet look like a jigsaw puzzle (upper smooth surfaced portion of the image). These fragments give an impression of the thin and brittle nature of solidified impact melt. Shadow lengths show these fractured pieces to be 5 to 8 meters thick. What caused the once level and smooth ponded surface to fracture? We don't know for sure, but by looking at the whole area a plausible story can be imagined. The south part of the melt lake with the fractured plates is connected to another melt lake at a lower elevation. Perhaps drainage of subsurface unsolidified melt might have dragged a crust toward the south and broken the it into many blocky pieces. Tectonic deformation of the crater wall, perhaps consisting of whole terraces deforming, also might have occurred which could deform the brittle crust of melt ponds.

Explore this mosaic of fractured melt rock and surroundings to help unravel the complex history of Jackson crater in the full NAC frame HERE.